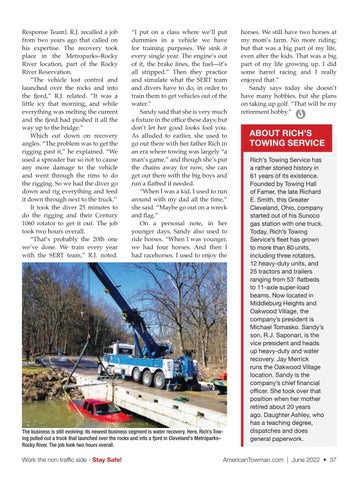 Response Team). R.J. recalled a job from two years ago that called on his expertise. The recovery took place in the Metroparks–Rocky River location, part of the Rocky River Reservation. “The vehicle lost control and launched over the rocks and into the fjord,” R.J. related. “It was a little icy that morning, and while everything was melting the current and the fjord had pushed it all the way up to the bridge.” Which cut down on recovery angles. “The problem was to get the rigging past it,” he explained. “We used a spreader bar so not to cause any more damage to the vehicle and went through the rims to do the rigging. So we had the diver go down and rig everything and feed it down through next to the truck.” It took the diver 25 minutes to do the rigging and their Century 1060 rotator to get it out. The job took two hours overall. “That’s probably the 20th one we’ve done. We train every year with the SERT team,” R.J. noted.

“I put on a class where we’ll put dummies in a vehicle we have for training purposes. We sink it every single year. The engine’s out of it, the brake lines, the fuel—it’s all stripped.” Then they practice and simulate what the SERT team and divers have to do, in order to train them to get vehicles out of the water.” Sandy said that she is very much a fixture in the office these days; but don’t let her good looks fool you. As alluded to earlier, she used to go out there with her father Rich in an era where towing was largely “a man’s game,” and though she’s put the chains away for now, she can get out there with the big boys and run a flatbed if needed. “When I was a kid, I used to run around with my dad all the time,” she said. “Maybe go out on a wreck and flag.” On a personal note, in her younger days, Sandy also used to ride horses. “When I was younger, we had four horses. And then I had racehorses. I used to enjoy the

The business is still evolving: its newest business segment is water recovery. Here, Rich’s Towing pulled out a truck that launched over the rocks and into a fjord in Cleveland’s Metroparks– Rocky River. The job took two hours overall.

ABOUT RICH’S TOWING SERVICE Rich’s Towing Service has a rather storied history in 61 years of its existence. Founded by Towing Hall of Famer, the late Richard E. Smith, this Greater Cleveland, Ohio, company started out of his Sunoco gas station with one truck. Today, Rich’s Towing Service’s fleet has grown to more than 80 units, including three rotators, 12 heavy-duty units, and 25 tractors and trailers ranging from 53’ flatbeds to 11-axle super-load beams. Now located in Middleburg Heights and Oakwood Village, the company’s president is Michael Tomasko. Sandy’s son, R.J. Saponari, is the vice president and heads up heavy-duty and water recovery. Jay Merrick runs the Oakwood Village location. Sandy is the company’s chief financial officer. She took over that position when her mother retired about 20 years ago. Daughter Ashley, who has a teaching degree, dispatches and does general paperwork.