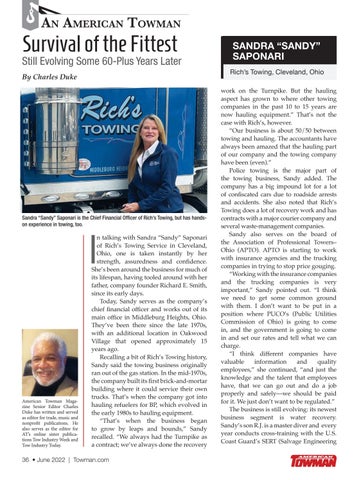 Survival of the Fittest

Still Evolving Some 60-Plus Years Later By Charles Duke

Sandra “Sandy” Saponari is the Chief Financial Officer of Rich’s Towing, but has handson experience in towing, too.

n talking with Sandra “Sandy” Saponari of Rich’s Towing Service in Cleveland, Ohio, one is taken instantly by her strength, assuredness and confidence. She’s been around the business for much of its lifespan, having tooled around with her father, company founder Richard E. Smith, since its early days. Today, Sandy serves as the company’s chief financial officer and works out of its main office in Middleburg Heights, Ohio. They’ve been there since the late 1970s, with an additional location in Oakwood Village that opened approximately 15 years ago. Recalling a bit of Rich’s Towing history, Sandy said the towing business originally ran out of the gas station. In the mid-1970s, the company built its first brick-and-mortar building where it could service their own trucks. That’s when the company got into hauling refuelers for BP, which evolved in the early 1980s to hauling equipment. “That’s when the business began to grow by leaps and bounds,” Sandy recalled. “We always had the Turnpike as a contract; we’ve always done the recovery

SANDRA “SANDY” SAPONARI Rich’s Towing, Cleveland, Ohio work on the Turnpike. But the hauling aspect has grown to where other towing companies in the past 10 to 15 years are now hauling equipment.” That’s not the case with Rich’s, however. “Our business is about 50/50 between towing and hauling. The accountants have always been amazed that the hauling part of our company and the towing company have been (even).” Police towing is the major part of the towing business, Sandy added. The company has a big impound lot for a lot of confiscated cars due to roadside arrests and accidents. She also noted that Rich’s Towing does a lot of recovery work and has contracts with a major courier company and several waste-management companies. Sandy also serves on the board of the Association of Professional Towers– Ohio (APTO). APTO is starting to work with insurance agencies and the trucking companies in trying to stop price gouging. “Working with the insurance companies and the trucking companies is very important,” Sandy pointed out. “I think we need to get some common ground with them. I don’t want to be put in a position where PUCO’s (Public Utilities Commission of Ohio) is going to come in, and the government is going to come in and set our rates and tell what we can charge. “I think different companies have valuable information and quality employees,” she continued, “and just the knowledge and the talent that employees have, that we can go out and do a job properly and safely—we should be paid for it. We just don’t want to be regulated.” The business is still evolving: its newest business segment is water recovery. Sandy’s son R.J. is a master diver and every year conducts cross-training with the U.S. Coast Guard’s SERT (Salvage Engineering