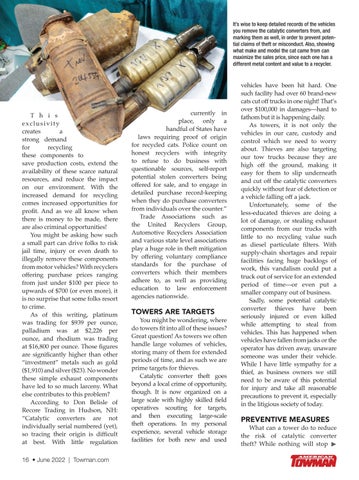 It’s wise to keep detailed records of the vehicles you remove the catalytic converters from, and marking them as well, in order to prevent potential claims of theft or misconduct. Also, showing what make and model the cat came from can maximize the sales price, since each one has a different metal content and value to a recycler.

T h i s exclusivity creates a strong demand for recycling these components to save production costs, extend the availability of these scarce natural resources, and reduce the impact on our environment. With the increased demand for recycling comes increased opportunities for profit. And as we all know when there is money to be made, there are also criminal opportunities! You might be asking how such a small part can drive folks to risk jail time, injury or even death to illegally remove these components from motor vehicles? With recyclers offering purchase prices ranging from just under $100 per piece to upwards of $700 (or even more), it is no surprise that some folks resort to crime. As of this writing, platinum was trading for $939 per ounce, palladium was at $2,226 per ounce, and rhodium was trading at $16,800 per ounce. Those figures are significantly higher than other “investment” metals such as gold ($1,910) and silver ($23). No wonder these simple exhaust components have led to so much larceny. What else contributes to this problem? According to Don Belisle of Recore Trading in Hudson, NH: “Catalytic converters are not individually serial numbered (yet), so tracing their origin is difficult at best. With little regulation 16 • June 2022 | Towman.com

currently in place, only a handful of States have laws requiring proof of origin for recycled cats. Police count on honest recyclers with integrity to refuse to do business with questionable sources, self-report potential stolen converters being offered for sale, and to engage in detailed purchase record-keeping when they do purchase converters from individuals over the counter.” Trade Associations such as the United Recyclers Group, Automotive Recyclers Association and various state level associations play a huge role in theft mitigation by offering voluntary compliance standards for the purchase of converters which their members adhere to, as well as providing education to law enforcement agencies nationwide.

You might be wondering, where do towers fit into all of these issues? Great question! As towers we often handle large volumes of vehicles, storing many of them for extended periods of time, and as such we are prime targets for thieves. Catalytic converter theft goes beyond a local crime of opportunity, though. It is now organized on a large scale with highly skilled field operatives scouting for targets, and then executing large-scale theft operations. In my personal experience, several vehicle storage facilities for both new and used

vehicles have been hit hard. One such facility had over 60 brand-new cats cut off trucks in one night! That’s over $100,000 in damages—hard to fathom but it is happening daily. As towers, it is not only the vehicles in our care, custody and control which we need to worry about. Thieves are also targeting our tow trucks because they are high off the ground, making it easy for them to slip underneath and cut off the catalytic converters quickly without fear of detection or a vehicle falling off a jack. Unfortunately, some of the less-educated thieves are doing a lot of damage, or stealing exhaust components from our trucks with little to no recycling value such as diesel particulate filters. With supply-chain shortages and repair facilities facing huge backlogs of work, this vandalism could put a truck out of service for an extended period of time—or even put a smaller company out of business. Sadly, some potential catalytic converter thieves have been seriously injured or even killed while attempting to steal from vehicles. This has happened when vehicles have fallen from jacks or the operator has driven away, unaware someone was under their vehicle. While I have little sympathy for a thief, as business owners we still need to be aware of this potential for injury and take all reasonable precautions to prevent it, especially in the litigious society of today.

What can a tower do to reduce the risk of catalytic converter theft? While nothing will stop