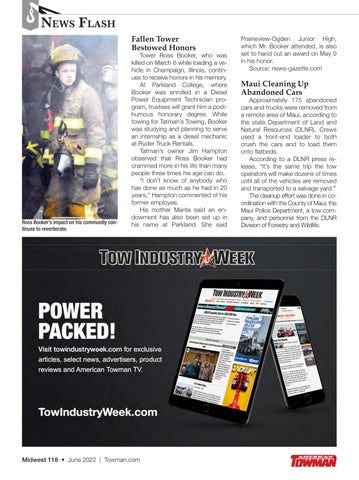 Ross Booker’s impact on his community continues to reverberate.

Tower Ross Booker, who was killed on March 6 while loading a vehicle in Champaign, Illinois, continues to receive honors in his memory. At Parkland College, where Booker was enrolled in a Diesel Power Equipment Technician program, trustees will grant him a posthumous honorary degree. While towing for Tatman’s Towing, Booker was studying and planning to serve an internship as a diesel mechanic at Ryder Truck Rentals. Tatman’s owner Jim Hampton observed that Ross Booker had crammed more in his life than many people three times his age can do. “I don’t know of anybody who has done as much as he had in 20 years,” Hampton commented of his former employee. His mother Marita said an endowment has also been set up in his name at Parkland. She said

Prairieview-Ogden Junior High, which Mr. Booker attended, is also set to hand out an award on May 9 in his honor. Source: news-gazette.com

Approximately 175 abandoned cars and trucks were removed from a remote area of Maui, according to the state Department of Land and Natural Resources (DLNR). Crews used a front-end loader to both crush the cars and to load them onto flatbeds. According to a DLNR press release, “It’s the same trip the tow operators will make dozens of times until all of the vehicles are removed and transported to a salvage yard.” The cleanup effort was done in coordination with the County of Maui, the Maui Police Department, a tow company, and personnel from the DLNR Division of Forestry and Wildlife.