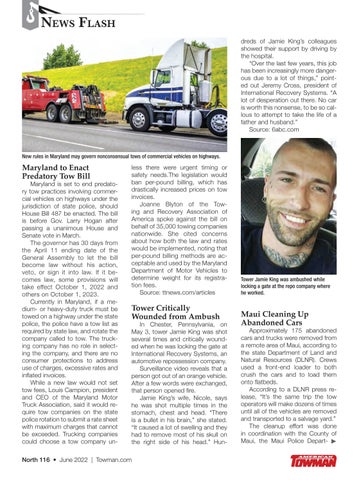 News Flash dreds of Jamie King’s colleagues showed their support by driving by the hospital. “Over the last few years, this job has been increasingly more dangerous due to a lot of things,” pointed out Jeremy Cross, president of International Recovery Systems. “A lot of desperation out there. No car is worth this nonsense, to be so callous to attempt to take the life of a father and husband.” Source: 6abc.com

New rules in Maryland may govern nonconsensual tows of commercial vehicles on highways.

Maryland is set to end predatory tow practices involving commercial vehicles on highways under the jurisdiction of state police, should House Bill 487 be enacted. The bill is before Gov. Larry Hogan after passing a unanimous House and Senate vote in March. The governor has 30 days from the April 11 ending date of the General Assembly to let the bill become law without his action, veto, or sign it into law. If it becomes law, some provisions will take effect October 1, 2022 and others on October 1, 2023. Currently in Maryland, if a medium- or heavy-duty truck must be towed on a highway under the state police, the police have a tow list as required by state law, and rotate the company called to tow. The trucking company has no role in selecting the company, and there are no consumer protections to address use of charges, excessive rates and inflated invoices. While a new law would not set tow fees, Louis Campion, president and CEO of the Maryland Motor Truck Association, said it would require tow companies on the state police rotation to submit a rate sheet with maximum charges that cannot be exceeded. Trucking companies could choose a tow company un-

less there were urgent timing or safety needs.The legislation would ban per-pound billing, which has drastically increased prices on tow invoices. Joanne Blyton of the Towing and Recovery Association of America spoke against the bill on behalf of 35,000 towing companies nationwide. She cited concerns about how both the law and rates would be implemented, noting that per-pound billing methods are acceptable and used by the Maryland Department of Motor Vehicles to determine weight for its registration fees. Source: ttnews.com/articles

In Chester, Pennsylvania, on May 3, tower Jamie King was shot several times and critically wounded when he was locking the gate at International Recovery Systems, an automotive repossession company. Surveillance video reveals that a person got out of an orange vehicle. After a few words were exchanged, that person opened fire. Jamie King’s wife, Nicole, says he was shot multiple times in the stomach, chest and head. “There is a bullet in his brain,” she stated. “It caused a lot of swelling and they had to remove most of his skull on the right side of his head.” Hun-

Tower Jamie King was ambushed while locking a gate at the repo company where he worked.

Approximately 175 abandoned cars and trucks were removed from a remote area of Maui, according to the state Department of Land and Natural Resources (DLNR). Crews used a front-end loader to both crush the cars and to load them onto flatbeds. According to a DLNR press release, “It’s the same trip the tow operators will make dozens of times until all of the vehicles are removed and transported to a salvage yard.” The cleanup effort was done in coordination with the County of Maui, the Maui Police Depart-