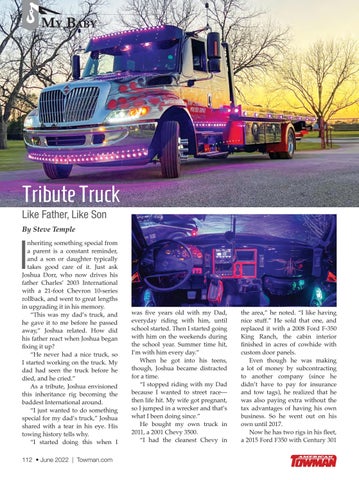 nheriting something special from a parent is a constant reminder, and a son or daughter typically takes good care of it. Just ask Joshua Dorr, who now drives his father Charles’ 2003 International with a 21-foot Chevron 10-series rollback, and went to great lengths in upgrading it in his memory. “This was my dad’s truck, and he gave it to me before he passed away,” Joshua related. How did his father react when Joshua began fixing it up? “He never had a nice truck, so I started working on the truck. My dad had seen the truck before he died, and he cried.” As a tribute, Joshua envisioned this inheritance rig becoming the baddest International around. “I just wanted to do something special for my dad’s truck,” Joshua shared with a tear in his eye. His towing history tells why. “I started doing this when I 112 • June 2022 | Towman.com

was five years old with my Dad, everyday riding with him, until school started. Then I started going with him on the weekends during the school year. Summer time hit, I’m with him every day.” When he got into his teens, though, Joshua became distracted for a time. “I stopped riding with my Dad because I wanted to street race— then life hit. My wife got pregnant, so I jumped in a wrecker and that’s what I been doing since.” He bought my own truck in 2011, a 2001 Chevy 3500. “I had the cleanest Chevy in

the area,” he noted. “I like having nice stuff.” He sold that one, and replaced it with a 2008 Ford F-350 King Ranch, the cabin interior finished in acres of cowhide with custom door panels. Even though he was making a lot of money by subcontracting to another company (since he didn’t have to pay for insurance and tow tags), he realized that he was also paying extra without the tax advantages of having his own business. So he went out on his own until 2017. Now he has two rigs in his fleet, a 2015 Ford F350 with Century 301