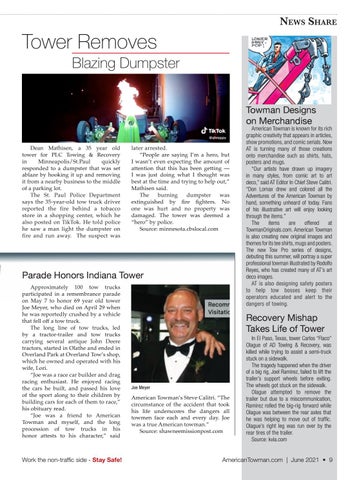 Dean Mathisen, a 35 year old tower for PLC Towing & Recovery in Minneapolis/St.Paul quickly responded to a dumpster that was set ablaze by hooking it up and removing it from a nearby business to the middle of a parking lot. The St. Paul Police Department says the 35-year-old tow truck driver reported the fire behind a tobacco store in a shopping center, which he also posted on TikTok. He told police he saw a man light the dumpster on fire and run away. The suspect was

later arrested. “People are saying I’m a hero, but I wasn’t even expecting the amount of attention that this has been getting — I was just doing what I thought was best at the time and trying to help out,” Mathisen said. The burning dumpster was extinguished by fire fighters. No one was hurt and no property was damaged. The tower was deemed a “hero” by police. Source: minnesota.cbslocal.com

Parade Honors Indiana Tower Approximately 100 tow trucks participated in a remembrance parade on May 7 to honor 69 year old tower Joe Meyer, who died on April 29 when he was reportedly crushed by a vehicle that fell off a tow truck. The long line of tow trucks, led by a tractor-trailer and tow trucks carrying several antique John Deere tractors, started in Olathe and ended in Overland Park at Overland Tow’s shop, which he owned and operated with his wife, Lori. “Joe was a race car builder and drag racing enthusiast. He enjoyed racing the cars he built, and passed his love of the sport along to their children by building cars for each of them to race,” his obituary read. “Joe was a friend to American Towman and myself, and the long procession of tow trucks in his honor attests to his character,” said

American Towman is known for its rich graphic creativity that appears in articles, show promotions, and comic serials. Now AT is turning many of those creations onto merchandise such as shirts, hats, posters and mugs. “Our artists have drawn up imagery in many styles, from comic art to art deco,” said AT Editor In Chief Steve Calitri. “Don Lomax drew and colored all the Adventures of the American Towman by hand, something unheard of today. Fans of his illustrative art will enjoy looking through the items.” The items are offered at TowmanOriginals.com. American Towman is also creating new original images and themes for its tee shirts, mugs and posters. The new Tow Pro series of designs, debuting this summer, will portray a super professional towman illustrated by Rodolfo Reyes, who has created many of AT’s art deco images. AT is also designing safety posters to help tow bosses keep their operators educated and alert to the dangers of towing.

American Towman’s Steve Calitri. “The circumstance of the accident that took his life underscores the dangers all towmen face each and every day. Joe was a true American towman.” Source: shawneemissionpost.com

In El Paso, Texas, tower Carlos “Flaco” Olague of AD Towing & Recovery, was killed while trying to assist a semi-truck stuck on a sidewalk. The tragedy happened when the driver of a big rig, Joel Ramirez, failed to lift the trailer’s support wheels before exiting. The wheels got stuck on the sidewalk. Olague attempted to remove the trailer but due to a miscommunication, Ramirez rolled the big-rig forward while Olague was between the rear axles that he was helping to move out of traffic. Olague’s right leg was run over by the rear tires of the trailer. Source: kvia.com