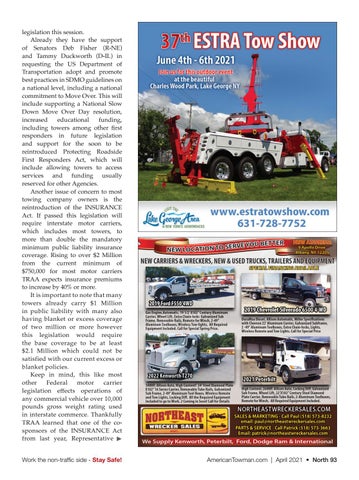 legislation this session. Already they have the support of Senators Deb Fisher (R-NE) and Tammy Duckworth (D-IL) in requesting the US Department of Transportation adopt and promote best practices in SDMO guidelines on a national level, including a national commitment to Move Over. This will include supporting a National Slow Down Move Over Day resolution, increased educational funding, including towers among other first responders in future legislation and support for the soon to be reintroduced Protecting Roadside First Responders Act, which will include allowing towers to access services and funding usually reserved for other Agencies. Another issue of concern to most towing company owners is the reintroduction of the INSURANCE Act. If passed this legislation will require interstate motor carriers, which includes most towers, to more than double the mandatory minimum public liability insurance coverage. Rising to over $2 Million from the current minimum of $750,000 for most motor carriers TRAA expects insurance premiums to increase by 40% or more. It is important to note that many towers already carry $1 Million in public liability with many also having blanket or excess coverage of two million or more however this legislation would require the base coverage to be at least $2.1 Million which could not be satisfied with our current excess or blanket policies. Keep in mind, this like most other Federal motor carrier legislation effects operations of any commercial vehicle over 10,000 pounds gross weight rating used in interstate commerce. Thankfully TRAA learned that one of the cosponsors of the INSURANCE Act from last year, Representative