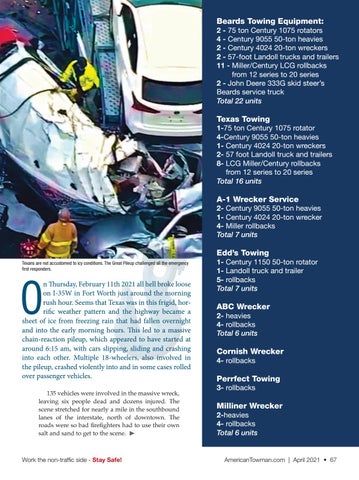 Edd’s Towing Texans are not accustomed to icy conditions. The Great Pileup challenged all the emergency first responders.

n Thursday, February 11th 2021 all hell broke loose on I-35W in Fort Worth just around the morning rush hour. Seems that Texas was in this frigid, horrific weather pattern and the highway became a sheet of ice from freezing rain that had fallen overnight and into the early morning hours. This led to a massive chain-reaction pileup, which appeared to have started at around 6:15 am, with cars slipping, sliding and crashing into each other. Multiple 18-wheelers, also involved in the pileup, crashed violently into and in some cases rolled over passenger vehicles. 135 vehicles were involved in the massive wreck, leaving six people dead and dozens injured. The scene stretched for nearly a mile in the southbound lanes of the interstate, north of downtown. The roads were so bad firefighters had to use their own salt and sand to get to the scene.