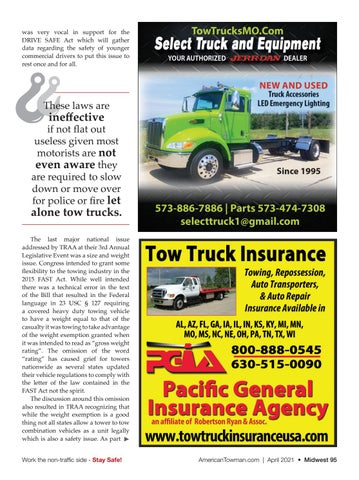 was very vocal in support for the DRIVE SAFE Act which will gather data regarding the safety of younger commercial drivers to put this issue to rest once and for all.

alone tow trucks. The last major national issue addressed by TRAA at their 3rd Annual Legislative Event was a size and weight issue. Congress intended to grant some flexibility to the towing industry in the 2015 FAST Act. While well intended there was a technical error in the text of the Bill that resulted in the Federal language in 23 USC § 127 requiring a covered heavy duty towing vehicle to have a weight equal to that of the casualty it was towing to take advantage of the weight exemption granted when it was intended to read as “gross weight rating”. The omission of the word “rating” has caused grief for towers nationwide as several states updated their vehicle regulations to comply with the letter of the law contained in the FAST Act not the spirit. The discussion around this omission also resulted in TRAA recognizing that while the weight exemption is a good thing not all states allow a tower to tow combination vehicles as a unit legally which is also a safety issue. As part