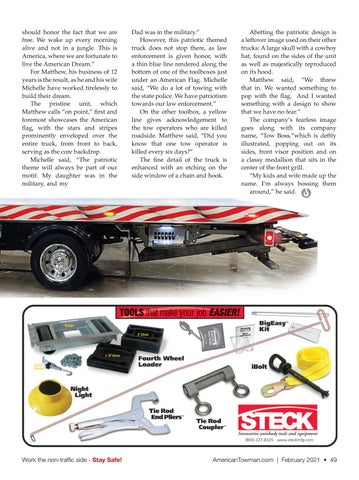 should honor the fact that we are free. We wake up every morning alive and not in a jungle. This is America, where we are fortunate to live the American Dream.” For Matthew, his business of 12 years is the result, as he and his wife Michelle have worked tirelessly to build their dream. The pristine unit, which Matthew calls “on point,” first and foremost showcases the American flag, with the stars and stripes prominently enveloped over the entire truck, from front to back, serving as the core backdrop. Michelle said, “The patriotic theme will always be part of our motif. My daughter was in the military, and my

Dad was in the military.” However, this patriotic themed truck does not stop there, as law enforcement is given honor, with a thin blue line rendered along the bottom of one of the toolboxes just under an American Flag. Michelle said, “We do a lot of towing with the state police. We have patriotism towards our law enforcement.” On the other toolbox, a yellow line gives acknowledgement to the tow operators who are killed roadside. Matthew said, “Did you know that one tow operator is killed every six days?” The fine detail of the truck is enhanced with an etching on the side window of a chain and hook.

Abetting the patriotic design is a leftover image used on their other trucks: A large skull with a cowboy hat, found on the sides of the unit as well as majestically reproduced on its hood. Matthew said, “We threw that in. We wanted something to pop with the flag. And I wanted something with a design to show that we have no fear.” The company’s fearless image goes along with its company name, “Tow Boss,”which is deftly illustrated, popping out on its sides, front visor position and on a classy medallion that sits in the center of the front grill. “My kids and wife made up the name. I’m always bossing them around,” he said.