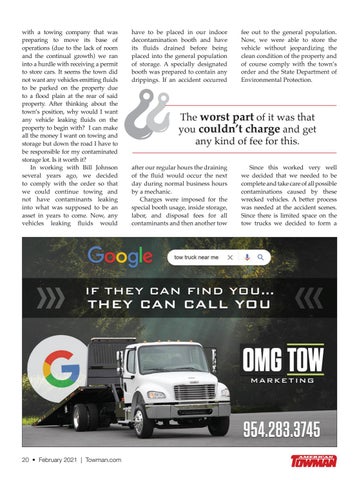 with a towing company that was preparing to move its base of operations (due to the lack of room and the continual growth) we ran into a hurdle with receiving a permit to store cars. It seems the town did not want any vehicles emitting fluids to be parked on the property due to a flood plain at the rear of said property. After thinking about the town’s position, why would I want any vehicle leaking fluids on the property to begin with? I can make all the money I want on towing and storage but down the road I have to be responsible for my contaminated storage lot. Is it worth it? In working with Bill Johnson several years ago, we decided to comply with the order so that we could continue towing and not have contaminants leaking into what was supposed to be an asset in years to come. Now, any vehicles leaking fluids would

have to be placed in our indoor decontamination booth and have its fluids drained before being placed into the general population of storage. A specially designated booth was prepared to contain any drippings. If an accident occurred

fee out to the general population. Now, we were able to store the vehicle without jeopardizing the clean condition of the property and of course comply with the town’s order and the State Department of Environmental Protection.

The worst part of it was that you couldn’t charge and get any kind of fee for this. after our regular hours the draining of the fluid would occur the next day during normal business hours by a mechanic. Charges were imposed for the special booth usage, inside storage, labor, and disposal fees for all contaminants and then another tow

Since this worked very well we decided that we needed to be complete and take care of all possible contaminations caused by these wrecked vehicles. A better process was needed at the accident scenes. Since there is limited space on the tow trucks we decided to form a