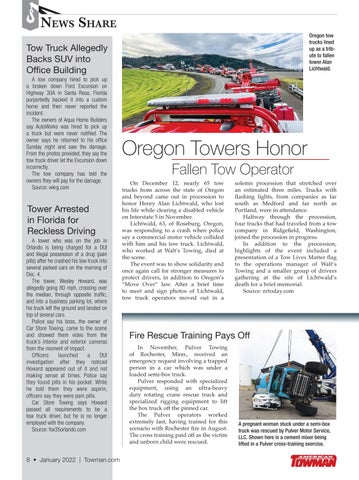 Oregon tow trucks lined up as a tribute to fallen tower Alan Lichtwald.

Tow Truck Allegedly Backs SUV into Office Building A tow company hired to pick up a broken down Ford Excursion on Highway 30A in Santa Rosa, Florida purportedly backed it into a custom home and then never reported the incident. The owners of Aqua Home Builders say AutoWorks was hired to pick up a truck but were never notified. The owner says he returned to his office Sunday night and saw the damage. From the photos provided, they say the tow truck driver let the Excursion down incorrectly. The tow company has told the owners they will pay for the damage. Source: wkrg.com

A tower who was on the job in Orlando is being charged for a DUI and illegal possession of a drug (pain pills) after he crashed his tow truck into several parked cars on the morning of Dec. 4. The tower, Wesley Howard, was allegedly going 80 mph, crossing over the median, through opposite traffic, and into a business parking lot, where his truck left the ground and landed on top of several cars. Police say his boss, the owner of Car Store Towing, came to the scene and showed them video from the truck’s interior and exterior cameras from the moment of impact. Officers launched a DUI investigation after they noticed Howard appeared out of it and not making sense at times. Police say they found pills in his pocket. While he told them they were aspirin, officers say they were pain pills. Car Store Towing says Howard passed all requirements to be a tow truck driver, but he is no longer employed with the company. Source: fox35orlando.com

On December 12, nearly 65 tow trucks from across the state of Oregon and beyond came out in procession to honor Henry Alan Lichtwald, who lost his life while clearing a disabled vehicle on Interstate 5 in November. Lichtwald, 63, of Roseburg, Oregon, was responding to a crash when police say a commercial motor vehicle collided with him and his tow truck. Lichtwald, who worked at Walt’s Towing, died at the scene. The event was to show solidarity and once again call for stronger measures to protect drivers, in addition to Oregon’s “Move Over” law. After a brief time to meet and sign photos of Lichtwald, tow truck operators moved out in a

solemn procession that stretched over an estimated three miles. Trucks with flashing lights, from companies as far south as Medford and far north as Portland, were in attendance. Halfway through the procession, four trucks that had traveled from a tow company in Ridgefield, Washington, joined the procession in progress. In addition to the procession, highlights of the event included a presentation of a Tow Lives Matter flag to the operations manager of Walt’s Towing and a smaller group of drivers gathering at the site of Lichtwald’s death for a brief memorial. Source: nrtoday.com

Fire Rescue Training Pays Off In November, Pulver Towing of Rochester, Minn., received an emergency request involving a trapped person in a car which was under a loaded semi-box truck. Pulver responded with specialized equipment, using an ultra-heavy duty rotating crane rescue truck and specialized rigging equipment to lift the box truck off the pinned car. The Pulver operators worked extremely fast, having trained for this scenario with Rochester fire in August. The cross training paid off as the victim and unborn child were rescued.

A pregnant woman stuck under a semi-box truck was rescued by Pulver Motor Service, LLC. Shown here is a cement mixer being lifted in a Pulver cross-training exercise.