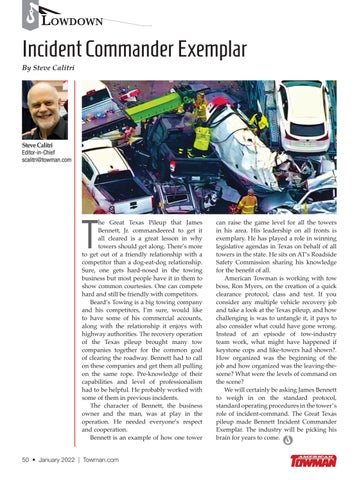 he Great Texas Pileup that James Bennett, Jr. commandeered to get it all cleared is a great lesson in why towers should get along. There’s more to get out of a friendly relationship with a competitor than a dog-eat-dog relationship. Sure, one gets hard-nosed in the towing business but most people have it in them to show common courtesies. One can compete hard and still be friendly with competitors. Beard’s Towing is a big towing company and his competitors, I’m sure, would like to have some of his commercial accounts, along with the relationship it enjoys with highway authorities. The recovery operation of the Texas pileup brought many tow companies together for the common goal of clearing the roadway. Bennett had to call on these companies and get them all pulling on the same rope. Pre-knowledge of their capabilities and level of professionalism had to be helpful. He probably worked with some of them in previous incidents. The character of Bennett, the business owner and the man, was at play in the operation. He needed everyone’s respect and cooperation. Bennett is an example of how one tower

can raise the game level for all the towers in his area. His leadership on all fronts is exemplary. He has played a role in winning legislative agendas in Texas on behalf of all towers in the state. He sits on AT’s Roadside Safety Commission sharing his knowledge for the benefit of all. American Towman is working with tow boss, Ron Myers, on the creation of a quick clearance protocol, class and test. If you consider any multiple vehicle recovery job and take a look at the Texas pileup, and how challenging is was to untangle it, it pays to also consider what could have gone wrong. Instead of an episode of tow-industry team work, what might have happened if keystone cops and like-towers had shown?. How organized was the beginning of the job and how organized was the leaving-thescene? What were the levels of command on the scene? We will certainly be asking James Bennett to weigh in on the standard protocol, standard operating procedures in the tower’s role of incident-command. The Great Texas pileup made Bennett Incident Commander Exemplar. The industry will be picking his brain for years to come.