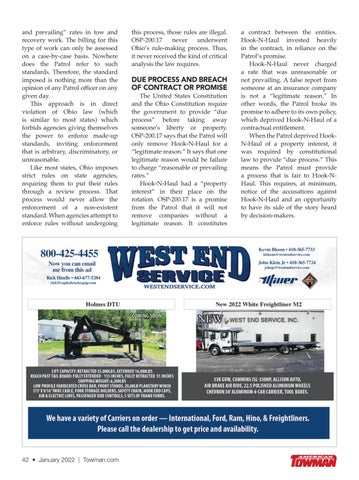 and prevailing” rates in tow and recovery work. The billing for this type of work can only be assessed on a case-by-case basis. Nowhere does the Patrol refer to such standards. Therefore, the standard imposed is nothing more than the opinion of any Patrol officer on any given day. This approach is in direct violation of Ohio law (which is similar to most states) which forbids agencies giving themselves the power to enforce made-up standards, inviting enforcement that is arbitrary, discriminatory, or unreasonable. Like most states, Ohio imposes strict rules on state agencies, requiring them to put their rules through a review process. That process would never allow the enforcement of a non-existent standard. When agencies attempt to enforce rules without undergoing

DUE PROCESS AND BREACH OF CONTRACT OR PROMISE The United States Constitution and the Ohio Constitution require the government to provide “due process” before taking away someone’s liberty or property. OSP-200.17 says that the Patrol will only remove Hook-N-Haul for a “legitimate reason.” It says that one legitimate reason would be failure to charge “reasonable or prevailing rates.” Hook-N-Haul had a “property interest” in their place on the rotation. OSP-200.17 is a promise from the Patrol that it will not remove companies without a legitimate reason. It constitutes

a contract between the entities. Hook-N-Haul invested heavily in the contract, in reliance on the Patrol’s promise. Hook-N-Haul never charged a rate that was unreasonable or not prevailing. A false report from someone at an insurance company is not a “legitimate reason.” In other words, the Patrol broke its promise to adhere to its own policy, which deprived Hook-N-Haul of a contractual entitlement. When the Patrol deprived HookN-Haul of a property interest, it was required by constitutional law to provide “due process.” This means the Patrol must provide a process that is fair to Hook-NHaul. This requires, at minimum, notice of the accusations against Hook-N-Haul and an opportunity to have its side of the story heard by decision-makers.