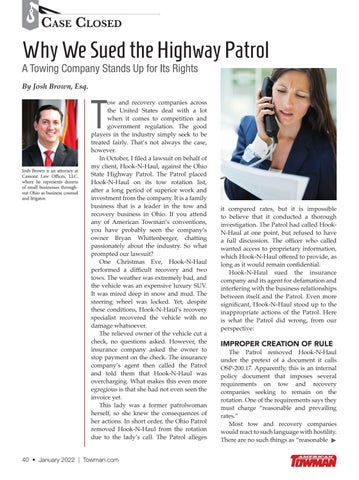 Why We Sued the Highway Patrol A Towing Company Stands Up for Its Rights By Josh Brown, Esq.

ow and recovery companies across the United States deal with a lot when it comes to competition and government regulation. The good players in the industry simply seek to be treated fairly. That’s not always the case, however. In October, I filed a lawsuit on behalf of my client, Hook-N-Haul, against the Ohio State Highway Patrol. The Patrol placed Hook-N-Haul on its tow rotation list, after a long period of superior work and investment from the company. It is a family business that is a leader in the tow and recovery business in Ohio. If you attend any of American Towman’s conventions, you have probably seen the company’s owner Bryan Whittenberger, chatting passionately about the industry. So what prompted our lawsuit? One Christmas Eve, Hook-N-Haul performed a difficult recovery and two tows. The weather was extremely bad, and the vehicle was an expensive luxury SUV. It was mired deep in snow and mud. The steering wheel was locked. Yet, despite these conditions, Hook-N-Haul’s recovery specialist recovered the vehicle with no damage whatsoever. The relieved owner of the vehicle cut a check, no questions asked. However, the insurance company asked the owner to stop payment on the check. The insurance company’s agent then called the Patrol and told them that Hook-N-Haul was overcharging. What makes this even more egregious is that she had not even seen the invoice yet. This lady was a former patrolwoman herself, so she knew the consequences of her actions. In short order, the Ohio Patrol removed Hook-N-Haul from the rotation due to the lady’s call. The Patrol alleges

it compared rates, but it is impossible to believe that it conducted a thorough investigation. The Patrol had called HookN-Haul at one point, but refused to have a full discussion. The officer who called wanted access to proprietary information, which Hook-N-Haul offered to provide, as long as it would remain confidential. Hook-N-Haul sued the insurance company and its agent for defamation and interfering with the business relationships between itself and the Patrol. Even more significant, Hook-N-Haul stood up to the inappropriate actions of the Patrol. Here is what the Patrol did wrong, from our perspective:

The Patrol removed Hook-N-Haul under the pretext of a document it calls OSP-200.17. Apparently, this is an internal policy document that imposes several requirements on tow and recovery companies seeking to remain on the rotation. One of the requirements says they must charge “reasonable and prevailing rates.” Most tow and recovery companies would react to such language with hostility. There are no such things as “reasonable