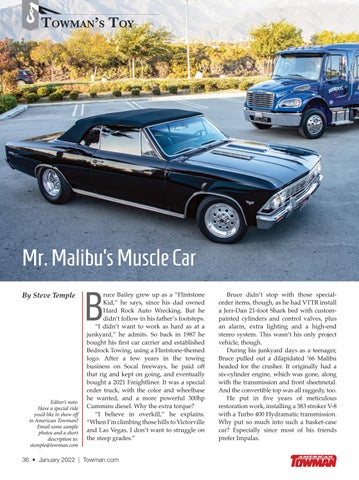 Editor’s note: Have a special ride you’d like to show off in American Towman? Email some sample photos and a short description to: stemple@towman.com

ruce Bailey grew up as a “Flintstone Kid,” he says, since his dad owned Hard Rock Auto Wrecking. But he didn’t follow in his father’s footsteps. “I didn’t want to work as hard as at a junkyard,” he admits. So back in 1987 he bought his first car carrier and established Bedrock Towing, using a Flintstone-themed logo. After a few years in the towing business on Socal freeways, he paid off that rig and kept on going, and eventually bought a 2021 Freightliner. It was a special order truck, with the color and wheelbase he wanted, and a more powerful 300hp Cummins diesel. Why the extra torque? “I believe in overkill,” he explains. “When I’m climbing those hills to Victorville and Las Vegas, I don’t want to struggle on the steep grades.”

Bruce didn’t stop with those specialorder items, though, as he had VTTR install a Jerr-Dan 21-foot Shark bed with custompainted cylinders and control valves, plus an alarm, extra lighting and a high-end stereo system. This wasn’t his only project vehicle, though. During his junkyard days as a teenager, Bruce pulled out a dilapidated ’66 Malibu headed for the crusher. It originally had a six-cylinder engine, which was gone, along with the transmission and front sheetmetal. And the convertible top was all raggedy, too. He put in five years of meticulous restoration work, installing a 383 stroker V-8 with a Turbo 400 Hydramatic transmission. Why put so much into such a basket-case car? Especially since most of his friends prefer Impalas.