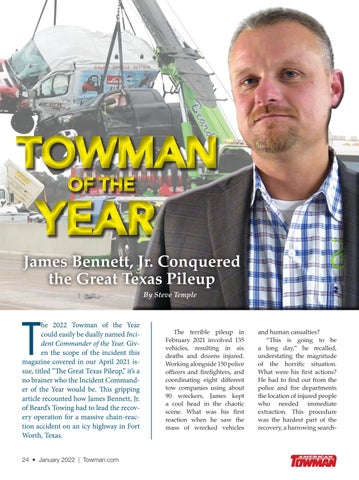 he 2022 Towman of the Year could easily be dually named Incident Commander of the Year. Given the scope of the incident this magazine covered in our April 2021 issue, titled “The Great Texas Pileup,” it’s a no brainer who the Incident Commander of the Year would be. This gripping article recounted how James Bennett, Jr. of Beard’s Towing had to lead the recovery operation for a massive chain-reaction accident on an icy highway in Fort Worth, Texas. 24 • January 2022 | Towman.com

The terrible pileup in February 2021 involved 135 vehicles, resulting in six deaths and dozens injured. Working alongside 150 police officers and firefighters, and coordinating eight different tow companies using about 90 wreckers, James kept a cool head in the chaotic scene. What was his first reaction when he saw the mass of wrecked vehicles

and human casualties? “This is going to be a long day,” he recalled, understating the magnitude of the horrific situation. What were his first actions? He had to find out from the police and fire departments the location of injured people who needed immediate extraction. This procedure was the hardest part of the recovery, a harrowing search-