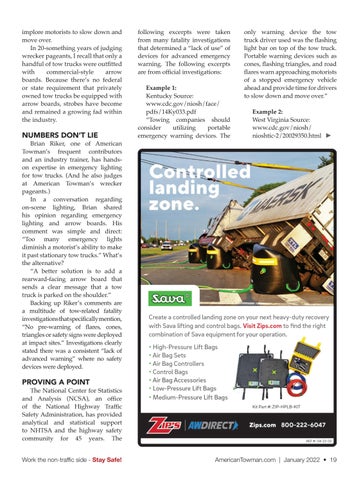 implore motorists to slow down and move over. In 20-something years of judging wrecker pageants, I recall that only a handful of tow trucks were outfitted with commercial-style arrow boards. Because there’s no federal or state requirement that privately owned tow trucks be equipped with arrow boards, strobes have become and remained a growing fad within the industry.

Brian Riker, one of American Towman’s frequent contributors and an industry trainer, has handson expertise in emergency lighting for tow trucks. (And he also judges at American Towman’s wrecker pageants.) In a conversation regarding on-scene lighting, Brian shared his opinion regarding emergency lighting and arrow boards. His comment was simple and direct: “Too many emergency lights diminish a motorist’s ability to make it past stationary tow trucks.” What’s the alternative? “A better solution is to add a rearward-facing arrow board that sends a clear message that a tow truck is parked on the shoulder.” Backing up Riker’s comments are a multitude of tow-related fatality investigations that specifically mention, “No pre-warning of flares, cones, triangles or safety signs were deployed at impact sites.” Investigations clearly stated there was a consistent “lack of advanced warning” where no safety devices were deployed.

only warning device the tow truck driver used was the flashing light bar on top of the tow truck. Portable warning devices such as cones, flashing triangles, and road flares warn approaching motorists of a stopped emergency vehicle ahead and provide time for drivers to slow down and move over.” Example 2: West Virginia Source: www.cdc.gov/niosh/ nioshtic-2/20029350.html

The National Center for Statistics and Analysis (NCSA), an office of the National Highway Traffic Safety Administration, has provided analytical and statistical support to NHTSA and the highway safety community for 45 years. The Work the non-traffic side - Stay Safe!