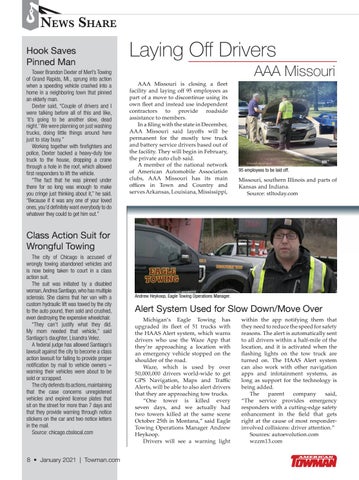 Tower Brandon Dexter of Merl’s Towing of Grand Rapids, Mi., sprung into action when a speeding vehicle crashed into a home in a neighboring town that pinned an elderly man. Dexter said, “Couple of drivers and I were talking before all of this and like, ‘It’s going to be another slow, dead night.’ We were planning on just washing trucks, doing little things around here just to stay busy.” Working together with firefighters and police, Dexter backed a heavy-duty tow truck to the house, dropping a crane through a hole in the roof, which allowed first responders to lift the vehicle. “The fact that he was pinned under there for so long was enough to make you cringe just thinking about it,” he said. “Because if it was any one of your loved ones, you’d definitely want everybody to do whatever they could to get him out.”

AAA Missouri is closing a fleet facility and laying off 95 employees as part of a move to discontinue using its own fleet and instead use independent contractors to provide roadside assistance to members. In a filing with the state in December, AAA Missouri said layoffs will be permanent for the mostly tow truck and battery service drivers based out of the facility. They will begin in February, the private auto club said. A member of the national network of American Automobile Association clubs, AAA Missouri has its main offices in Town and Country and serves Arkansas, Louisiana, Mississippi,

95 employees to be laid off.

The city of Chicago is accused of wrongly towing abandoned vehicles and is now being taken to court in a class action suit. The suit was initiated by a disabled woman, Andrea Santiago, who has multiple sclerosis. She claims that her van with a custom hydraulic lift was towed by the city to the auto pound, then sold and crushed, even destroying the expensive wheelchair. “They can’t justify what they did. My mom needed that vehicle,” said Santiago’s daughter, Lisandra Velez. A federal judge has allowed Santiago’s lawsuit against the city to become a class action lawsuit for failing to provide proper notification by mail to vehicle owners – warning their vehicles were about to be sold or scrapped. The city defends its actions, maintaining that the case concerns unregistered vehicles and expired license plates that sit on the street for more than 7 days and that they provide warning through notice stickers on the car and two notice letters in the mail. Source: chicago.cbslocal.com

Alert System Used for Slow Down/Move Over Michigan’s Eagle Towing has upgraded its fleet of 51 trucks with the HAAS Alert system, which warns drivers who use the Waze App that they’re approaching a location with an emergency vehicle stopped on the shoulder of the road. Waze, which is used by over 50,000,000 drivers world-wide to get GPS Navigation, Maps and Traffic Alerts, will be able to also alert drivers that they are approaching tow trucks. “One tower is killed every seven days, and we actually had two towers killed at the same scene October 25th in Montana,” said Eagle Towing Operations Manager Andrew Heykoop. Drivers will see a warning light

within the app notifying them that they need to reduce the speed for safety reasons. The alert is automatically sent to all drivers within a half-mile of the location, and it is activated when the flashing lights on the tow truck are turned on. The HAAS Alert system can also work with other navigation apps and infotainment systems, as long as support for the technology is being added. The parent company said, “The service provides emergency responders with a cutting-edge safety enhancement in the field that gets right at the cause of most responderinvolved collisions: driver attention.” Sources: autoevolution.com wzzm13.com