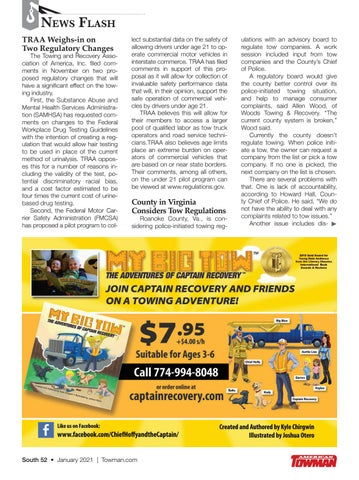 The Towing and Recovery Association of America, Inc. filed comments in November on two proposed regulatory changes that will have a significant effect on the towing industry. First, the Substance Abuse and Mental Health Services Administration (SAMHSA) has requested comments on changes to the Federal Workplace Drug Testing Guidelines with the intention of creating a regulation that would allow hair testing to be used in place of the current method of urinalysis. TRAA opposes this for a number of reasons including the validity of the test, potential discriminatory racial bias, and a cost factor estimated to be four times the current cost of urinebased drug testing. Second, the Federal Motor Carrier Safety Administration (FMCSA) has proposed a pilot program to col-

lect substantial data on the safety of allowing drivers under age 21 to operate commercial motor vehicles in interstate commerce. TRAA has filed comments in support of this proposal as it will allow for collection of invaluable safety performance data that will, in their opinion, support the safe operation of commercial vehicles by drivers under age 21. TRAA believes this will allow for their members to access a larger pool of qualified labor as tow truck operators and road service technicians.TRAA also believes age limits place an extreme burden on operators of commercial vehicles that are based on or near state borders. Their comments, among all others, on the under 21 pilot program can be viewed at www.regulations.gov.

ulations with an advisory board to regulate tow companies. A work session included input from tow companies and the County’s Chief of Police. A regulatory board would give the county better control over its police-initiated towing situation, and help to manage consumer complaints, said Allen Wood, of Woods Towing & Recovery. “The current county system is broken,” Wood said. Currently the county doesn’t regulate towing. When police initiate a tow, the owner can request a company from the list or pick a tow company. If no one is picked, the next company on the list is chosen. There are several problems with that. One is lack of accountability, according to Howard Hall, County Chief of Police. He said, “We do not have the ability to deal with any complaints related to tow issues.” Another issue includes dis-