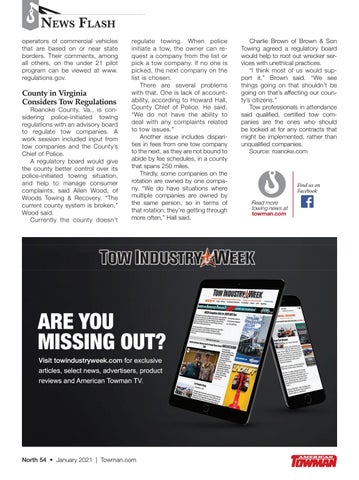 News Flash operators of commercial vehicles that are based on or near state borders. Their comments, among all others, on the under 21 pilot program can be viewed at www. regulations.gov.

Roanoke County, Va., is considering police-initiated towing regulations with an advisory board to regulate tow companies. A work session included input from tow companies and the County’s Chief of Police. A regulatory board would give the county better control over its police-initiated towing situation, and help to manage consumer complaints, said Allen Wood, of Woods Towing & Recovery. “The current county system is broken,” Wood said. Currently the county doesn’t

regulate towing. When police initiate a tow, the owner can request a company from the list or pick a tow company. If no one is picked, the next company on the list is chosen. There are several problems with that. One is lack of accountability, according to Howard Hall, County Chief of Police. He said, “We do not have the ability to deal with any complaints related to tow issues.” Another issue includes disparities in fees from one tow company to the next, as they are not bound to abide by fee schedules, in a county that spans 250 miles. Thirdly, some companies on the rotation are owned by one company. “We do have situations where multiple companies are owned by the same person, so in terms of that rotation, they’re getting through more often,” Hall said.

Charlie Brown of Brown & Son Towing agreed a regulatory board would help to root out wrecker services with unethical practices. “I think most of us would support it,” Brown said. “We see things going on that shouldn’t be going on that’s affecting our county’s citizens.” Tow professionals in attendance said qualified, certified tow companies are the ones who should be looked at for any contracts that might be implemented, rather than unqualified companies. Source: roanoke.com