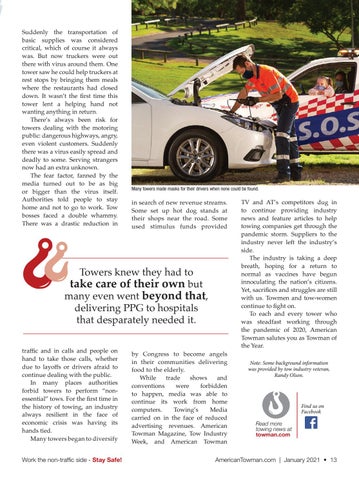 Suddenly the transportation of basic supplies was considered critical, which of course it always was. But now truckers were out there with virus around them. One tower saw he could help truckers at rest stops by bringing them meals where the restaurants had closed down. It wasn’t the first time this tower lent a helping hand not wanting anything in return. There’s always been risk for towers dealing with the motoring public: dangerous highways, angry, even violent customers. Suddenly there was a virus easily spread and deadly to some. Serving strangers now had an extra unknown. The fear factor, fanned by the media turned out to be as big or bigger than the virus itself. Authorities told people to stay home and not to go to work. Tow bosses faced a double whammy. There was a drastic reduction in

Many towers made masks for their drivers when none could be found.

in search of new revenue streams. Some set up hot dog stands at their shops near the road. Some used stimulus funds provided

Towers knew they had to take care of their own but many even went beyond that, delivering PPG to hospitals that desparately needed it. traffic and in calls and people on hand to take those calls, whether due to layoffs or drivers afraid to continue dealing with the public. In many places authorities forbid towers to perform “nonessential” tows. For the first time in the history of towing, an industry always resilient in the face of economic crisis was having its hands tied. Many towers began to diversify Work the non-traffic side - Stay Safe!

by Congress to become angels in their communities delivering food to the elderly. While trade shows and conventions were forbidden to happen, media was able to continue its work from home computers. Towing’s Media carried on in the face of reduced advertising revenues. American Towman Magazine, Tow Industry Week, and American Towman

TV and AT’s competitors dug in to continue providing industry news and feature articles to help towing companies get through the pandemic storm. Suppliers to the industry never left the industry’s side. The industry is taking a deep breath, hoping for a return to normal as vaccines have begun innoculating the nation’s citizens. Yet, sacrifices and struggles are still with us. Towmen and tow-women continue to fight on. To each and every tower who was steadfast working through the pandemic of 2020, American Towman salutes you as Towman of the Year. Note: Some background information was provided by tow industry veteran, Randy Olson.