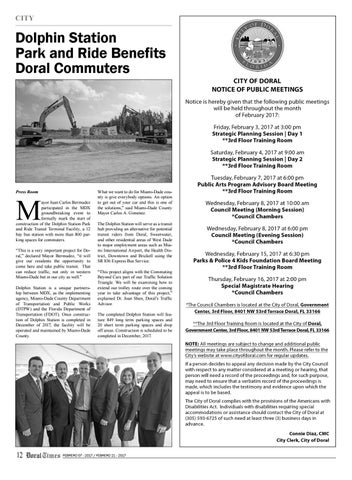 ayor Juan Carlos Bermudez participated in the MDX groundbreaking event to formally mark the start of construction of the Dolphin Station Park and Ride Transit Terminal Facility, a 12 bay bus station with more than 800 parking spaces for commuters. “This is a very important project for Doral,” declared Mayor Bermudez, “it will give our residents the opportunity to come here and take public transit. That can reduce traffic, not only in western Miami-Dade but in our city as well.” Dolphin Station is a unique partnership between MDX, as the implementing agency, Miami-Dade County Department of Transportation and Public Works (DTPW) and the Florida Department of Transportation (FDOT). Once construction of Dolphin Station is completed in December of 2017, the facility will be operated and maintained by Miami-Dade County.

What we want to do for Miami-Dade county is give everybody options. An option to get out of your car and this is one of the solutions,” said Miami-Dade County Mayor Carlos A. Gimenez. The Dolphin Station will serve as a transit hub providing an alternative for potential transit riders from Doral, Sweetwater, and other residential areas of West Dade to major employment areas such as Miami International Airport, the Health District, Downtown and Brickell using the SR 836 Express Bus Service. “This project aligns with the Commuting Beyond Cars part of our Traffic Solution Triangle. We will be examining how to extend our trolley route over the coming year to take advantage of this project,” explained Dr. Joan Shen, Doral’s Traffic Advisor. The completed Dolphin Station will feature 849 long term parking spaces and 20 short term parking spaces and drop off areas. Construction is scheduled to be completed in December, 2017. 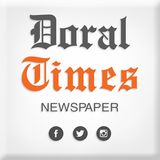