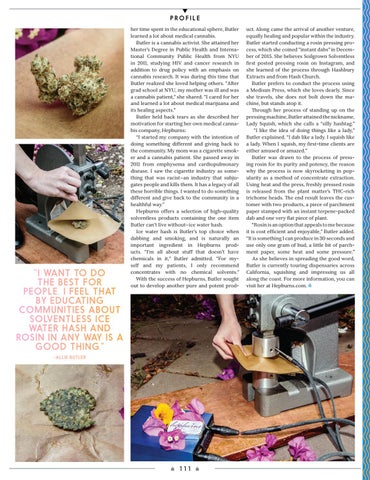 “I WANT TO DO THE BEST FOR PEOPLE. I FEEL THAT BY EDUCATING COMMUNITIES ABOUT SOLVENTLESS ICE WATER HASH AND ROSIN IN ANY WAY IS A GOOD THING.” -ALLIE BUTLER

her time spent in the educational sphere, Butler learned a lot about medical cannabis. Butler is a cannabis activist. She attained her Master’s Degree in Public Health and International Community Public Health from NYU in 2011, studying HIV and cancer research in addition to drug policy with an emphasis on cannabis research. It was during this time that Butler realized she loved helping others. “After grad school at NYU, my mother was ill and was a cannabis patient,” she shared. “I cared for her and learned a lot about medical marijuana and its healing aspects.” Butler held back tears as she described her motivation for starting her own medical cannabis company, Hepburns: “I started my company with the intention of doing something different and giving back to the community. My mom was a cigarette smoker and a cannabis patient. She passed away in 2011 from emphysema and cardiopulmonary disease. I saw the cigarette industry as something that was racist—an industry that subjugates people and kills them. It has a legacy of all these horrible things. I wanted to do something different and give back to the community in a healthful way.” Hepburns offers a selection of high-quality solventless products containing the one item Butler can’t live without—ice water hash. Ice water hash is Butler’s top choice when dabbing and smoking, and is naturally an important ingredient in Hepburns products. “I’m all about stuff that doesn’t have chemicals in it,” Butler admitted. “For myself and my patients, I only recommend concentrates with no chemical solvents.” With the success of Hepburns, Butler sought out to develop another pure and potent prod-

uct. Along came the arrival of another venture, equally healing and popular within the industry. Butler started conducting a rosin pressing process, which she coined “instant dabs” in December of 2015. She believes Soilgrown Solventless first posted pressing rosin on Instagram, and she learned of the process through Hashbury Extracts and from Hash Church. Butler prefers to conduct the process using a Medisun Press, which she loves dearly. Since she travels, she does not bolt down the machine, but stands atop it. Through her process of standing up on the pressing machine, Butler attained the nickname, Lady Squish, which she calls a “silly hashtag.” “I like the idea of doing things like a lady,” Butler explained. “I dab like a lady. I squish like a lady. When I squish, my first-time clients are either amused or amazed.” Butler was drawn to the process of pressing rosin for its purity and potency, the reason why the process is now skyrocketing in popularity as a method of concentrate extraction. Using heat and the press, freshly pressed rosin is released from the plant matter’s THC-rich trichome heads. The end result leaves the customer with two products, a piece of parchment paper stamped with an instant terpene-packed dab and one very flat piece of plant. “Rosin is an option that appeals to me because it is cost efficient and enjoyable,” Butler added. “It is something I can produce in 30 seconds and use only one gram of bud, a little bit of parchment paper, some heat and some pressure.” As she believes in spreading the good word, Butler is currently touring dispensaries across California, squishing and impressing us all along the coast. For more information, you can visit her at Hepburns.com. 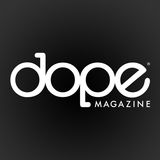