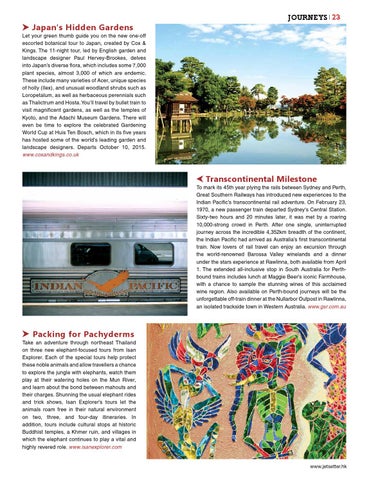 Japan’s Hidden Gardens Let your green thumb guide you on the new one-off escorted botanical tour to Japan, created by Cox & Kings. The 11-night tour, led by English garden and landscape designer Paul Hervey-Brookes, delves into Japan’s diverse flora, which includes some 7,000 plant species, almost 3,000 of which are endemic. These include many varieties of Acer, unique species of holly (Ilex), and unusual woodland shrubs such as Loropetalum, as well as herbaceous perennials such as Thalictrum and Hosta. You’ll travel by bullet train to visit magnificent gardens, as well as the temples of Kyoto, and the Adachi Museum Gardens. There will even be time to explore the celebrated Gardening World Cup at Huis Ten Bosch, which in its five years has hosted some of the world's leading garden and landscape designers. Departs October 10, 2015. www.coxandkings.co.uk

Transcontinental Milestone To mark its 45th year plying the rails between Sydney and Perth, Great Southern Railways has introduced new experiences to the Indian Pacific’s transcontinental rail adventure. On February 23, 1970, a new passenger train departed Sydney's Central Station. Sixty-two hours and 20 minutes later, it was met by a roaring 10,000-strong crowd in Perth. After one single, uninterrupted journey across the incredible 4,352km breadth of the continent, the Indian Pacific had arrived as Australia’s first transcontinental train. Now lovers of rail travel can enjoy an excursion through the world-renowned Barossa Valley winelands and a dinner under the stars experience at Rawlinna, both available from April 1. The extended all-inclusive stop in South Australia for Perthbound trains includes lunch at Maggie Beer’s iconic Farmhouse, with a chance to sample the stunning wines of this acclaimed wine region. Also available on Perth-bound journeys will be the unforgettable off-train dinner at the Nullarbor Outpost in Rawlinna, an isolated trackside town in Western Australia. www.gsr.com.au

Packing for Pachyderms Take an adventure through northeast Thailand on three new elephant-focused tours from Isan Explorer. Each of the special tours help protect these noble animals and allow travellers a chance to explore the jungle with elephants, watch them play at their watering holes on the Mun River, and learn about the bond between mahouts and their charges. Shunning the usual elephant rides and trick shows, Isan Explorer’s tours let the animals roam free in their natural environment on two, three, and four-day itineraries. In addition, tours include cultural stops at historic Buddhist temples, a Khmer ruin, and villages in which the elephant continues to play a vital and highly revered role. www.isanexplorer.com www.jetsetter.hk 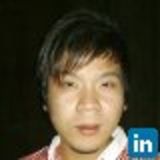