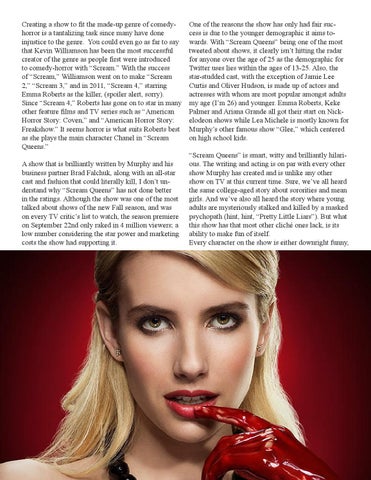 Creating a show to fit the made-up genre of comedyhorror is a tantalizing task since many have done injustice to the genre. You could even go as far to say that Kevin Williamson has been the most successful creator of the genre as people first were introduced to comedy-horror with “Scream.” With the success of “Scream,” Williamson went on to make “Scream 2,” “Scream 3,” and in 2011, “Scream 4,” starring Emma Roberts as the killer, (spoiler alert, sorry). Since “Scream 4,” Roberts has gone on to star in many other feature films and TV series such as “American Horror Story: Coven,” and “American Horror Story: Freakshow.” It seems horror is what suits Roberts best as she plays the main character Chanel in “Scream Queens.” A show that is brilliantly written by Murphy and his business partner Brad Falchuk, along with an all-star cast and fashion that could literally kill, I don’t understand why “Scream Queens” has not done better in the ratings. Although the show was one of the most talked about shows of the new Fall season, and was on every TV critic’s list to watch, the season premiere on September 22nd only raked in 4 million viewers; a low number considering the star power and marketing costs the show had supporting it.

One of the reasons the show has only had fair success is due to the younger demographic it aims towards. With “Scream Queens” being one of the most tweeted about shows, it clearly isn’t hitting the radar for anyone over the age of 25 as the demographic for Twitter uses lies within the ages of 13-25. Also, the star-studded cast, with the exception of Jamie Lee Curtis and Oliver Hudson, is made up of actors and actresses with whom are most popular amongst adults my age (I’m 26) and younger. Emma Roberts, Keke Palmer and Ariana Grande all got their start on Nickelodeon shows while Lea Michele is mostly known for Murphy’s other famous show “Glee,” which centered on high school kids. “Scream Queens” is smart, witty and brilliantly hilarious. The writing and acting is on par with every other show Murphy has created and is unlike any other show on TV at this current time. Sure, we’ve all heard the same college-aged story about sororities and mean girls. And we’ve also all heard the story where young adults are mysteriously stalked and killed by a masked psychopath (hint, hint, “Pretty Little Liars”). But what this show has that most other cliché ones lack, is its ability to make fun of itself. Every character on the show is either downright funny, 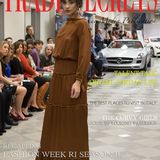