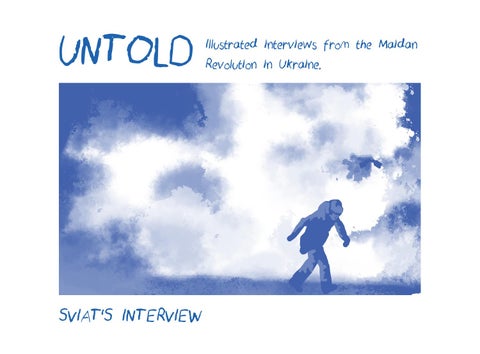 Illustrated interviews from the Maidan Revolution in Ukraine.

EUROMAIDAN THE REVOLUTION BEGAN IN NOVEMBER 2013. THE CITIZENS OF KYIV TOOK TO MAIDAN NEZALEZHNOSTI (INDEPENDENCE SQUARE) TO EXPRESS THEIR ANGER TOWARDS CORRUPT PRESIDENT YANUKOVYCH’S DECISION TO POSTPONE AN AGREEMENT WITH THE EU, AND EXTEND CLOSER TIES TOWARDS RUSSIA. THE PROTESTS BEGAN TO EXPAND ALL OVER THE COUNTRY, AND NUMEROUS ISSUES WERE BROUGHT UP; CORRUPTION, POVERTY, LACK OF FOOD. BUT THE MAIN FOCUS WAS STILL THERE, TO ACHIEVE ’EUROPEAN VALUES’. AS THE PROTESTS EXPANDED, SO DID THE VIOLENCE, AND WHAT STARTED OUT AS STREET PROTESTS TURNED INTO A BLOODY REVOLUTION. OVER 100 PROTESTORS WERE KILLED, MANY BY GOVERNMENT HIRED SNIPERS AND 18 POLICEMAN WERE KILLED DURING CLASHES. THE INSTABILITY RESULTED IN PUTIN USING THE OPPORTUNITY TO ANNEX CRIMEA, CAUSING EVEN MORE OF A DIVIDE IN THE COUNTRY. ANTI-EU PROTESTS BEGAN IN THE PREDOMINANTLY RUSSIAN SPEAKING REGIONS OF DONETSK AND LUHANSK, WHICH TURNED INTO A SEPERATIST MOVEMENT, AND EVENTUALLY A FULL ON WAR WHICH IS STILL ONGOING TODAY. PUBLIC OPINION ON THE REVOLUTION DIFFERS DEPENDING ON WHO YOU SPEAK TO AND IN WHAT REGION. IN MANY WAYS IT UNITED A LOT OF PEOPLE, AND OFFERED A HOPE FOR CHANGE. ACTIVISTS, LIKE SVIAT, ARE STILL MAKING CHANGES TO THIS DAY.

Maidan was started by young people and to begin with it was peaceful with no violence.

But in November, military police came to the square where people were gathered and beat them.

There was no reason to do that.

My friends were beaten a lot.

When they came to the university with bandages, it was an awful feeling to see them.

After the violence, more people began to gather. It was all over Ukraine. It became a feeling of movement.

We needed to fight for civil rights. My story is not about Maidan in Kyiv, but the region of Maidan. I travelled to West Ukraine, talking to people

We were working quickly on communication; translating articles into English, trying to send them to friends abroad to spread information.

We organised food and hot drinks for the protestors in Rivne, whilst monitoring what was happening in Kyiv.

But there was another side created by different groups: paid thugs called titushkas, who worked with the police to catch and beat people in Maidan.

They were trained to fight people, and for us as students, it was hard to beat them.

If you called the police they would just take you to prison instead.

So another part of our agenda was to find the areas where the titushkas were and spread information in order for people to unite and go to those locations and scare them away.

Still we had a peaceful initiative and lots of them sprouted during the revolution.

For example, we gathered many people from different backgrounds to walk on Maidan. The police couldnâ&amp;#x20AC;&amp;#x2122;t do anything with such a large group.

However, after the first person was killed, everything changed.

It went from a peaceful protest to people creating molotovs and bringing ammunition.

There were lots of different emotions when you were sitting in your room watching this violence on TV. it became very scary and people were trying not to freeze. But it was important to be there and to have this feeling of doing something

Four years on from the revolution, Sviat is now part of the organisation Insha Osvita, trying to further the agenda of Maidan through their project Urban Space 500. Like many of the activists I met in Kyiv, for him the ideology of Maidan is still ongoing. ’’I am a member of the project management of Urban Space 500. We unite 500 people emotionally and intellectually to open city spaces like restaurants, and cafes. Profit will be used to support projects around Kyiv, creating a community of proactive people from different spheres and different backgrounds but with the same values. That’s the cultural agenda of the space. It’s a replica from Urban Space 100 by Teple Mistro, which united 100 people in different areas. For me, it’s valuable to build connections with people and institutes to create a society which is comfortable for every person to live in. People create ideas for development of that space and build dialogue in order to attribute a new model of productive communication.’’ Find out more at www.insha-osvita.org and www.urbanspace500.com.ua You can read the full interiew with Sviat and others on my website. www.dominicculverwell.co.uk Dom Culverwell

The 2013/14 EuroMaidan revolution in Ukraine began in support of European values and against corruption. This interview with 23 year old Sviat, takes us through the revolution, from its peaceful beginning to its devastating violence. Sviat recounts his emotions and the role he played in aiding the movement.

Illustrations and interview by Dom Culverwell

An illustrated interview with an activist involved the Ukrainian EuroMaidan revolution. 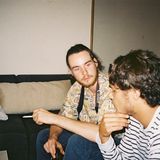