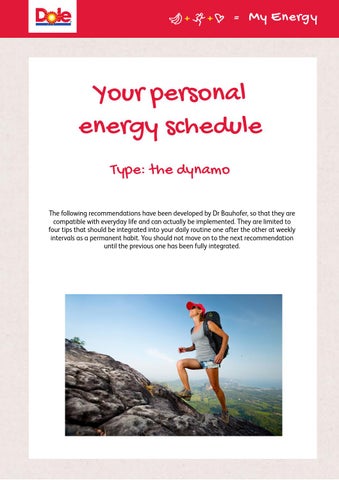 Your personal energy schedule Type: the dynamo The following recommendations have been developed by Dr Bauhofer, so that they are compatible with everyday life and can actually be implemented. They are limited to four tips that should be integrated into your daily routine one after the other at weekly intervals as a permanent habit. You should not move on to the next recommendation until the previous one has been fully integrated.

Week I: Put some pep in your metabolism â&#x20AC;Ś Weâ&#x20AC;&#x2DC;ll start the first week in the morning. Practise the following recommendation and keep it up during the weeks that follow: In the morning, when you get up, drink half a litre of warm water. Ideally, boil it briefly and then allow it to cool to drinking temperature. Slowly reduce your coffee intake. Remember to drink plenty throughout the day, ideally warm drinks, and certainly not any cooler than room temperature. Herbal teas, such as, peppermint, fennel, liquorice, yarrow or centaury are good for you. It is especially important to never drink anything cold when eating, since it weakens your digestive system.

Week II: You are what you eat ... Invigorate yourself at least three to four times a week with a smoothie â&#x20AC;&#x201C; enjoy it first thing or late morning. Use the following fruits, based on the time of year and their availability: bananas, mangoes, pears, sweet grapes, pineapple, sweet oranges, apples and kiwi fruit. You can also add coconut, almond, rice or oat milk to the smoothie if you wish. Alternatively, you can also make yourself a vegetable smoothie for a change, preferably with mostly sweet and bitter types of vegetable, such as, fennel, cucumber, courgette, pumpkin, celery, cabbage, Brussels sprouts, broccoli, bean sprouts, green leafy vegetables, such as, Swiss chard, savoy cabbage and spinach, green salad, artichokes, baby aubergines, mild radish and small radishes, okra or chicory. Add a little oil too, so that you can absorb the fat-soluble vitamins more easily. Make sure you have a good blender that operates at over 30,000 rpm. A smoothie like this is a tremendously important energy provider with its many vitamins, minerals, trace elements, secondary plant compounds and antioxidants. The second recommendation relates to your consumption of meat. Researchers at the University of Southern California have discovered that the risk of developing cancer is around 74% higher in people who eat a lot of animal protein than in people who only eat a very small amount of it. The study also states that the consumption of animal products also increases the likelihood of diseases such as diabetes considerably. Over recent decades, average meat consumption has almost quadrupled in Germany. Hence our tip: Get used to eating less meat and sausage, especially in the evening when your digestive system is winding down. If you do eat meat, then do so at midday and ideally eat fish or poultry of good quality.

Week III: A heartâ&#x20AC;&#x2DC;s desire that relaxes you and brings you pleasure ... Once youâ&#x20AC;&#x2DC;ve implemented the first two tips, focus from the third week onwards on regularly having fun. This is important for your energy type. Children laugh on average 450 times a day. Adults, on the other hand, only laugh around 15 times. Having a dogged attitude is an energy taker, while laughter is a major energy provider. It stimulates the immune system, improves the metabolism, reduces stress hormones and reduces the risk of a heart attack. So deliberately start doing things that relax you, bring you pleasure and make you laugh.

Week IV: A challenge for you: sport that‘s fun and not competitive! ... If you don‘t take part in sports regularly, it‘s a good idea to make a start. Use your competitive streak not to be competitive – if someone overtakes you, try not to keep up with them, but think about your own pace and how you‘re feeling right at that moment. After your exercise programme, you shouldn‘t feel exhausted and drained - so get involved with a sport that doesn‘t generate stress and overexertion, since otherwise it becomes an energy guzzler, producing excessively high quantities of free radicals. The emphasis should very much be on fun. The most suitable types of sport for you are swimming, jogging and Nordic walking, golf, winter sports and gentle yoga exercises, which are great for improving your mobility. It‘s a good idea to exercise three to four times a week for 30 to 40 minutes at a time.

Dr. Ulrich Bauhofer is a doctor, author, meditation coach and much sought-after speaker. He is regarded as the leading expert in the field of health, stress and energy management. He is also one of the most well-known Ayurveda specialists outside India. Over 30 years ago, he was the first western doctor to get involved with the scientific principles of the millennia-old practice of Ayurvedic healing. Dr. Bauhofer designed and led Germany‘s largest Ayurveda clinic for 10 years. He currently runs an Ayurvedic practice in Munich, advises companies on issues relating to health and energy management, delivers lectures and holds seminars. He is Chairman of the German Ayurvedic Society, co-initiator of the Weimar Visions and the ‚Festival of Thinking‘. You can find more information at: www.drbauhofer.de 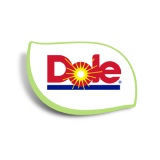