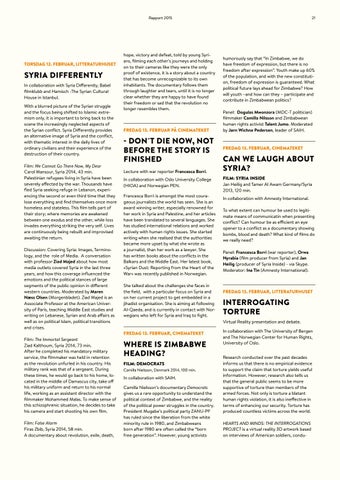 SYRIA DIFFERENTLY In collaboration with Syria Differently, Babel filmklubb and Hamisch -The Syrian Cultural House in Istanbul. With a blurred picture of the Syrian struggle and the focus being shifted to Islamic extremism only, it is important to bring back to the scene the increasingly neglected aspects of the Syrian conflict. Syria Differently provides an alternative image of Syria and the conflict, with thematic interest in the daily lives of ordinary civilians and their experience of the destruction of their country. Film: We Cannot Go There Now, My Dear Carol Mansour, Syria 2014, 43 min. Palestinian refugees living in Syria have been severely affected by the war. Thousands have fled Syria seeking refuge in Lebanon, experiencing the second or even third time that they lose everything and find themselves once more homeless and stateless. This film tells part of their story; where memories are awakened between one exodus and the other, while loss invades everything striking the very self. Lives are continuously being rebuilt and improvised awaiting the return. Discussion: Covering Syria: Images, Terminology, and the role of Media. A conversation with professor Ziad Majed about how most media outlets covered Syria in the last three years, and how this coverage influenced the emotions and the political stances of large segments of the public opinion in different western countries. Moderated by Maren Næss Olsen (Morgenbladet). Ziad Majed is an Associate Professor at the American University of Paris, teaching Middle East studies and writing on Lebanese, Syrian and Arab affairs as well as on political Islam, political transitions and crises. Film: The Immortal Sergeant Ziad Kalthoum, Syria 2014, 73 min. After he completed his mandatory military service, the filmmaker was held in retention as the revolution unfurled in his country. His military rank was that of a sergeant. During these times, he would go back to his home, located in the middle of Damascus city, take off his military uniform and return to his normal life, working as an assistant director with the filmmaker Mohammed Malas. To make sense of this schizophrenic situation, he decides to take his camera and start shooting his own film. Film: False Alarm Firas Zbib, Syria 2014, 58 min. A documentary about revolution, exile, death,

hope, victory and defeat, told by young Syrians, filming each other’s journeys and holding on to their cameras like they were the only proof of existence, it is a story about a country that has become unrecognizable to its own inhabitants. The documentary follows them through laughter and tears, until it is no longer clear whether they are happy to have found their freedom or sad that the revolution no longer resembles them.

- DON´T DIE NOW, NOT BEFORE THE STORY IS FINISHED Lecture with war reporter Francesca Borri. In collaboration with Oslo University College (HIOA) and Norwegian PEN. Francesca Borri is amongst the most courageous journalists the world has seen. She is an award winning writer, especially renowned for her work in Syria and Palestine, and her articles have been translated to several languages. She has studied international relations and worked actively with human rights issues. She started writing when she realised that the authorities became more upset by what she wrote as a journalist, than her work as a lawyer. She has written books about the conflicts in the Balkans and the Middle East. Her latest book, «Syrian Dust: Reporting from the Heart of the War» was recently published in Norwegian. She talked about the challenges she faces in the field, with a particular focus on Syria and on her current project to get embedded in a jihadist organisation. She is aiming at following Al-Qaeda, and is currently in contact with Norwegians who left for Syria and Iraq to fight.

humorously say that “In Zimbabwe, we do have freedom of expression, but there is no freedom after expression”. Youth make up 60% of the population, and with the new constitution, freedom of expression is guaranteed. What political future lays ahead for Zimbabwe? How will youth –and how can they – participate and contribute in Zimbabwean politics? Panel: Dogulas Mwonzora (MDC-T politician) filmmaker Camilla Nilsson and Zimbabwean human rights activist Talent Jumo. Moderated by Jørn Wichne Pedersen, leader of SAIH.

CAN WE LAUGH ABOUT SYRIA? FILM: SYRIA INSIDE Jan Heilig and Tamer Al Awam Germany/Syria 2013, 120 min. In collaboration with Amnesty International. To what extent can humour be used to legitimate means of communicatin when presenting conflict? Can humour be as efficient an eye opener to a conflict as a documentary showing bombs, blood and death? What kind of films do we really need? Panel: Francesca Borri (war reporter), Orwa Nyrabia (film producer from Syria) and Jan Heilig (producer of Syria Inside) - via Skype. Moderator: Ina Tin (Amnesty International).

In collaboration with SAIH. Camilla Nielsson’s documentary Democrats gives us a rare opportunity to understand the political context of Zimbabwe, and the reality of the political power struggles in the country. President Mugabe’s political party ZANU-PF has ruled since the liberation from the white minority rule in 1980, and Zimbabweans born after 1980 are often called the “born free generation”. However, young activists

In collaboration with The University of Bergen and The Norwegian Center for Human Rights, University of Oslo. Research conducted over the past decades informs us that there is no empirical evidence to support the claim that torture yields useful information. However, research also tells us that the general public seems to be more supportive of torture than members of the armed forces. Not only is torture a blatant human rights violation, it is also ineffective in terms of enhancing our security. Torture has produced countless victims across the world. HEARTS AND MINDS: THE INTERROGATIONS PROJECT is a virtual reality 3D artwork based on interviews of American soldiers, condu- 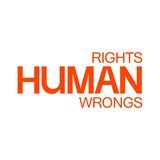