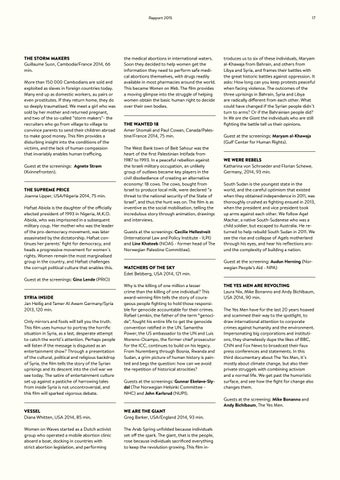 THE STORM MAKERS Guillaume Suon, Cambodia/France 2014, 66 min. More than 150 000 Cambodians are sold and exploited as slaves in foreign countries today. Many end up as domestic workers, au pairs or even prostitutes. If they return home, they do so deeply traumatised. We meet a girl who was sold by her mother and returned pregnant, and two of the so-called ”storm makers”- the recruiters who go from village to village to convince parents to send their children abroad to make good money. This film provides a disturbing insight into the conditions of the victims, and the lack of human compassion that invariably enables human trafficing. Guest at the screenings: Agnete Strøm (Kvinnefronten).

THE SUPREME PRICE Joanna Lipper, USA/Nigeria 2014, 75 min. Hafsat Abiola is the daughter of the officially elected president of 1993 in Nigeria, M.K.O. Abiola, who was imprisoned in a subsequent military coup. Her mother who was the leader of the pro-democracy movement, was later assasinated by the dictatorship. Hafsat continues her parents´ fight for democracy, and heads a progressive movement for women´s rights. Women remain the most marginalised group in the country, and Hafsat challenges the corrupt political culture that enables this. Guest at the screenings: Gina Lende (PRIO)

SYRIA INSIDE Jan Heilig and Tamer Al Awam Germany/Syria 2013, 120 min. Only mirrors and fools will tell you the truth. This film uses humour to portray the horrific situation in Syria, as a last, desperate attempt to catch the world´s attention. Perhaps people will listen if the message is disguised as an entertainment show? Through a presentation of the cultural, political and religious backdrop of Syria, the film tells the story of the Syrian uprisings and its descent into the civil war we see today. The satire of entertainment culture set up against a pastiche of harrowing tales from inside Syria is not uncontroversial, and this film will sparked vigorous debate.

the medical abortions in international waters. Soon they decided to help women get the information they need to perform safe medical abortions themselves, with drugs readily available in most pharmacies around the world. This became Women on Web. The film provides a moving glimpse into the struggle of helping women obtain the basic human right to decide over their own bodies.

THE WANTED 18 Amer Shomali and Paul Cowan, Canada/Palestine/France 2014, 75 min. The West Bank town of Beit Sahour was the heart of the first Palestinian Intifada from 1987 to 1993. In a peaceful rebellion against the Israeli military occupation, an unlikely group of outlaws became key players in the civil disobedience of creating an alternative economy: 18 cows. The cows, bought from Israel to produce local milk, were declared ”a threat to the national security of the State of Israel”, and thus the hunt was on. The film is as inventive as the social mobilisation, telling the incredulous story through animation, drawings and interviews. Guests at the screenings: Cecilie Hellestveit (International Law and Policy Institute - ILPI) and Line Khateeb (NOAS - former head of The Norwegian Palestine Committee).

WATCHERS OF THE SKY Edet Belzberg, USA 2014, 121 min. Why is the killing of one million a lesser crime than the killing of one individual? This award-winning film tells the story of courageous people fighting to hold those responsible for genocide accountable for their crimes. Rafael Lemkin, the father of the term “genocide”, fought his entire life to get the genocide convention ratified in the UN. Samantha Power, the US ambassador to the UN and Luis Moreno-Ocampo, the former chief prosecutor for the ICC, continues to build on his legacy. From Nuremberg through Bosnia, Rwanda and Sudan, a grim picture of human history is painted and begs the question: how can we avoid the repetition of historical atrocities? Guests at the screenings: Gunnar Ekeløve-Slydal (The Norwegian Helsinki Committee NHC) and John Karlsrud (NUPI).

Women on Waves started as a Dutch activist group who operated a mobile abortion clinic aboard a boat, docking in countries with strict abortion legislation, and performing

troduces us to six of these individuals, Maryam al-Khawaja from Bahrain, and others from Libya and Syria, and frames their battles with the great historic battles against oppression. It asks: How long can you keep protests peaceful when facing violence. The outcomes of the three uprisings in Bahrain, Syria and Libya are radically different from each other. What could have changed if the Syrian people didn´t turn to arms? Or if the Bahrainian people did? In We are the Giant the individuals who are still fighting the battle tell us their opinions. Guest at the screenings: Maryam al-Khawaja (Gulf Center for Human Rights).

WE WERE REBELS Katharina von Schroeder and Florian Schewe, Germany, 2014, 93 min. South Sudan is the youngest state in the world, and the careful optimism that existed when they obtained independence in 2011, was thoroughly crushed as fighting ensued in 2013, when the president and vice president took up arms against each other. We follow Agel Machar, a native South-Sudanese who was a child soldier, but escaped to Australia. He returned to help rebuild South Sudan in 2011. We see the rise and collapse of Agels motherland through his eyes, and hear his reflections around the complexity of building a nation. Guest at the screening: Audun Herning (Norwegian People’s Aid - NPA)

THE YES MEN ARE REVOLTING Laura Nix, Mike Bonanno and Andy Bichlbaum, USA 2014, 90 min. The Yes Men have for the last 20 years hoaxed and scammed their way to the spotlight, to draw international attention to corporate crimes against humanity and the environment. Impersonating big corporations and institutions, they shamelessly dupe the likes of BBC, CNN and Fox News to broadcast their faux press conferences and statements. In this third documentary about The Yes Men, it´s mostly about climate change, but also their private struggels with combining activism and a normal life. We get past the humoristic surface, and see how the fight for change also changes them. Guests at the screening: Mike Bonanno and Andy Bichlbaum, The Yes Men.