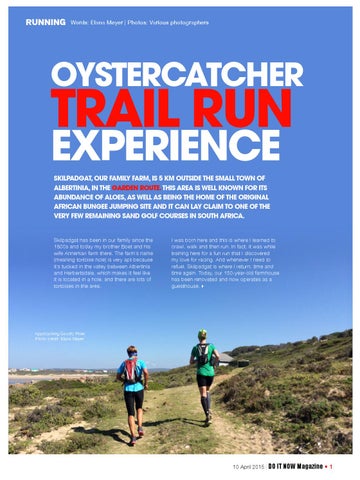 TRAIL RUN EXPERIENCE SKILPADGAT, OUR FAMILY FARM, IS 5 KM OUTSIDE THE SMALL TOWN OF ALBERTINIA, IN THE GARDEN ROUTE. THIS AREA IS WELL KNOWN FOR ITS ABUNDANCE OF ALOES, AS WELL AS BEING THE HOME OF THE ORIGINAL AFRICAN BUNGEE JUMPING SITE AND IT CAN LAY CLAIM TO ONE OF THE VERY FEW REMAINING SAND GOLF COURSES IN SOUTH AFRICA. Skilpadgat has been in our family since the 1800s and today my brother Boet and his wife Annemari farm there. The farm’s name (meaning tortoise hole) is very apt because it’s tucked in the valley between Albertinia and Herbertsdale, which makes it feel like it is located in a hole, and there are lots of tortoises in the area.

I was born here and this is where I learned to crawl, walk and then run. In fact, it was while training here for a fun run that I discovered my love for racing. And whenever I need to refuel, Skilpadgat is where I return, time and time again. Today, our 150-year-old farmhouse has been renovated and now operates as a guesthouse.

NOT ONLY DO I LOVE THE FARM, THE AREA HOLDS EQUALLY SPECIAL MEMORIES. SO A COUPLE OF YEARS AGO, WE INVITED SOME FRIENDS TO JOIN US ON A TRAIL RUN ON ONE OF THE MOST BEAUTIFUL HIKING TRAILS IN SOUTH AFRICA, THE OYSTERCATCHER TRAIL, AND EXPERIENCE THE AMAZING HOSPITALITY AND BEAUTY OF THE FARM AND SURROUNDING AREA. The trail is rated as one of the top hiking experiences in the world by BBC, in their book Unforgettable walks to do before you die. GETAWAY rated it is one of the top five hiking trails in South Africa, and National Geographic considers it to be one of the top 50 tours of a lifetime. It passes through varied terrains, ranging from cliff tops, sea-front caves and kilometres of unspoilt, untouched golden beaches, along rocky bays, over sand dunes and along coastal fynbos and herb routes. So it was not surprising that everybody was totally overwhelmed by the experience. After numerous requests to arrange another one, we decided to offer this exceptional running experience again this year, with ENDUROCAD, a distance running and endurance sports academy, as the nominated beneficiary. We invited 40 runners, with their families, to join us. Normally, it is a four-day hiking route, but we decided to cover it over two glorious days.

The whole clan arrived at Skilpadgat on Friday, 20 March. ProNutro came on board as a partner and sponsored the now-famous yellow tents, which served as deluxe accommodation, as well as played a big part in the breakfast zone every morning. The group was excited, but also a little nervous because of the distance that needed to be covered by foot over the next two days. That night, everyone gathered around a huge bonfire and enjoyed some homemade lasagne that was served with delicious salads and wine from a local winery, Jakkalsvlei. Even though Albertinia is not known for its wine, Jakkalsvlei is a Private Boutique Winery and certainly one of the best kept secrets of the Garden Route. After returning from the Napa Valley in 2006 to start his own brand at the foot of the Langeberg Mountains, owner Jantjie Jonker won the African Young Wine Competition in 2009 after he bottled his first bottle of wine in 2008.

We passed plenty of oystercatcher birds that were running around on the beach in search of their next meal.

After a restless night, and the occasional booming of the male ostriches in the camp next to the tents, the group awoke to the calls of a peacock at 05h30. By this time, the fires were already burning in the ‘donkeys’, so everyone could have a lovely warm shower. After a cup of steaming coffee and a delicious farm breakfast enjoyed in the ProNutro breakfast zone, everyone was fuelled and ready for the first 32 km that lay ahead. Jan, a local bus driver, was on hand and ready to transport the team to the Point in Mossel Bay, the start of day one. Gathering below the Cape St. Blaize Cave, the slower runners set off first, followed moments later by the rest of the group. The first 13,5 km to Dana Bay was along a wonderfully scenic route of craggy coastline, interesting caves, rocky formations, sweeping ocean views and pretty fynbos. We kept an eye on the white oystercatchers painted on rocks to make sure we didn’t stray from the route, as there are many little paths turning off both sides and you can easily get diverted.

AS THE PATH WOUND ITS WAY THROUGH THE COASTAL FYNBOS, WE PASSED A FEW SPOTS THAT WERE IDEAL FOR A COOLING SWIM IN THE ROCK POOLS OR SMALL SANDY BEACH. ON A GOOD DAY, THE VIEWS FROM THE PATH ARE SPECTACULAR AND YOU HAVE A GOOD CHANCE OF SPOTTING WHALES, DOLPHINS AND EVEN SHARKS IN THE WATER BELOW. BUT WHILE RUNNING, YOU HAVE TO WATCH YOUR FOOT FALL CLOSELY, AS THE TERRAIN IS ROCKY AND UNEVEN. 

Everyone had to carry their own water, but had the opportunity to refill their bottles after 14 km at Danabaai. This was also the point where those who were not so fit could end their day there. Once at Danabaai, you leave the rocky trail behind and for the next 18 km run on an unspoilt golden beach, something that is rare to find. We timed our arrival perfectly as it was low tide, which meant we had the whole beach to run on. Running for kilometre after kilometre on this perfect surface, with no camber and sinking into the sand, was pure bliss. Here, your mind could just be free, without having to think of where to put your next step. In the distance, you could see the houses of Boggomsbaai and then Vleesbaai. As Vleesbaai crept closer, slowly and seemingly reluctantly, we passed lots of oystercatcher birds that were running around on the beach in search of their next meal, as well as dolphins playing in the water. With only Mother Nature and the occasional fisherman, we had this beautiful, unspoilt beach all to ourselves. Running doesn’t get much better than this! However, the sight of the ProNutro banner looming ahead was a relief for all after 32 km of running. As we arrived, we were welcomed by our family, bearing gifts of cold drinks and the best-ever rooster brood with sausage. As we waited for all the runners to arrive, our tired bodies were treated to an amazing massage. Gazing out over the neverending azure ocean and with the sound of laughter and happy voices from the children filling the air as they played non-stop in the ocean and on the beach, everyone agreed it had been a perfect day.

Returning to the farm, some of the guests opted to take a little nap after a hard day’s work, while the others cooled off in the swimming pool. With the sun beginning to slip away and the wonderful aroma of a spit braai teasing everyone’s senses, everyone gathered around the fire to enjoy a glass of wine and a cheese platter. While the adults relaxed, the kids still had loads of energy to burn, some of which was spent on braaing the biggest marshmallows I’ve ever seen. Later, prizes donated by Sportsman’s Warehouse, Jakkalsvlei, adidas, Vital Health, ProNutro hampers, Jireh cheese hamper, Puma, Alcare and members of my family (Boet donated a sheep and my sister donated a beautiful hamper of Sh’Zen beauty products) were handed out. We laughed and cried with joy because many of our guests had never covered a distance of 32 km before.

THE SHEEP ON THE SPIT WAS AN ABSOLUTE HIGHLIGHT AND ONCE ALL THE HUNGRY RUNNERS HAD TUCKED IN, THERE WAS NOTHING LEFT. THAT NIGHT, NOBODY HEARD ANY DISTURBING NOISES ON THE FARM, EXCEPT FOR THE OCCASIONAL SNORE FROM THE TENT NEXT DOOR. 

The lamb was a great hit amongst the runners. Photo credit: David Papenfus.

It was non stop fun for the kids. Photo credit: David Papenfus

The kids had a ball. Photo credit: David Papenfus

One of the kid&#39;s braaing the biggest marshmallows Iâ&amp;#x20AC;&amp;#x2122;ve ever seen. Photo credit: David Papenfus

On the second day, everyone was really chilled as we climbed into the bus, which was headed to Vleesbaai for the 16 km route. The run started where we stopped the previous day and the first 3 to 4 km was along a beautiful coastal path. We got off to a slow start because the path followed the edge of a rocky shore and then went up and down little sandy dunes, but it was really spectacular with a very rich marine life. From there, the path goes up a steep incline with steps, which we named the ‘steps of courage’. At the top, you can see the historical town of Fransmanshoek, one of the most famous fishing spots in the southern Cape. It is also near Fransmanshoek where the &#39;Le Fortune&#39; ship was wrecked in 1763. The path then takes you from the point to Kanon Beach (Cape Vacca), located at the foot of massively high dunes that are nestled between fynbos, orange rocks and sandy beaches. Arriving at Gouritz River, you had the choice of either swimming across its mouth or being ferried over by a local fisherman, Gertjie. The run finished at the house of my wonderful parents, Daan and Ené, and thereafter, we indulged in some freshly made scones and a cold beer at Kusweg in Gouritz. After a splendid farewell lunch and 50 km of the most amazing running on an unforgettable trail, the weekend had come to an end. It had been a wonderful experience for my family. We had hosted 60 amazing people, opened our home to them, run a beautiful route with them and they in turn had enjoyed the hospitality and wonderful food provided by the place I still call home. Thank you to Jacques, my whole family and everyone who was part of this very special trail running experience. Thanks also go to all the sponsors for making this incredible occasion possible: ProNutro, Wilde Fruit Juices, Sportsman Warehouse, Vital Health, adidas, Jakkalsvlei, Jireh Cheese, Skilpadgat and Puma. •

MORE INFORMATION If you would be interested in joining us on one of our Skilpadgat trail running experiences, then contact Annemarie van Zyl on 083 4128552.

DO IT NOW Magazine. Skilpadgat, our family farm, is 5 km outside the small town of Albertinia, in the Garden Route. This area is well known for its abundance of aloes, as well as being the home of the original African bungee jumping site and it can lay claim to one of the very few remaining sand golf courses in South Africa. 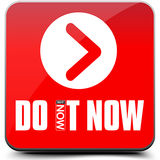 DO IT NOW Magazine