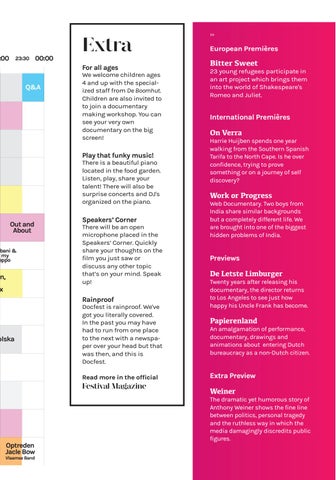 Extra For all ages

We welcome children ages 4 and up with the specialized staff from De Boomhut. Children are also invited to to join a documentary making workshop. You can see your very own documentary on the big screen!

There is a beautiful piano located in the food garden. Listen, play, share your talent! There will also be surprise concerts and DJ&#39;s organized on the piano.

There will be an open microphone placed in the Speakers’ Corner. Quickly share your thoughts on the film you just saw or discuss any other topic that’s on your mind. Speak up!

Docfest is rainproof. We&#39;ve got you literally covered. In the past you may have had to run from one place to the next with a newspaper over your head but that was then, and this is Docfest. Read more in the official

Bitter Sweet 23 young refugees participate in an art project which brings them into the world of Shakespeare&#39;s Romeo and Juliet.

On Verra Harrie Huijben spends one year walking from the Southern Spanish Tarifa to the North Cape. Is he over confidence, trying to prove something or on a journey of self discovery?

Work or Progress Web Documentary. Two boys from India share similar backgrounds but a completely different life. We are brought into one of the biggest hidden problems of India.

De Letste Limburger Twenty years after releasing his documentary, the director returns to Los Angeles to see just how happy his Uncle Frank has become.

Papierenland An amalgamation of performance, documentary, drawings and animations about entering Dutch bureaucracy as a non-Dutch citizen.

Weiner The dramatic yet humorous story of Anthony Weiner shows the fine line between politics, personal tragedy and the ruthless way in which the media damagingly discredits public figures. 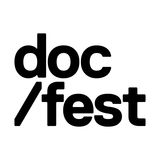