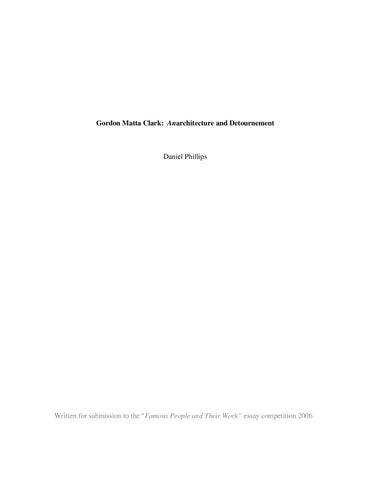 Phillips 1 In all disciplines there exists a radical minority that dares to tread just beyond the fringes of rational discourse. One such figure, whose elusive enigma teeters at the distant disciplinary edge of fine art as well as architecture, is Gordon Matta Clark. Not quite a designer, nor a performance artist, his decade of radically expressive projects still confound the conventional modes of assessment. It is however apparent that Clarkâ&amp;#x20AC;&amp;#x2122;s notorious forays into the re-shaping of condemned space reflect the critical spirit that had come to characterize the bulk of creative cultural production throughout the late 1960â&amp;#x20AC;&amp;#x2122;s. In addition to embracing the tactics of direct worldly engagement (as apparent in the manipulations of the earthworks artists), he was also apparently influenced by--or at least sympathetic to--the action centered social movement known as the Situationist International. The significant theoretical claims of the SI, espoused by radical leftist thinker Guy Debord, if explored in the same breath as an architectural critique, can provide a lens through which to better understand the thrust of Matta Clarkâ&amp;#x20AC;&amp;#x2122;s work. Of course it is crucial to consider the cultural scene in Paris, and elsewhere, in the summer of 1968 (experienced first hand by a young Matta Clark): Outraged students stormed Parisian boulevards, their empty wine bottles refilled with a revolutionary concoction of gasoline and latent revolutionary angst. Abroad, American students began to follow suit, heaving their school-issued Marx volumes through the windows of their institutions. Riots erupted in the forgotten projects, hundreds of thousands of the working class world wide danced in the streets in the middle of the week. Work was forgone, normalcy was thrown to wind, and a growing mass of artists, writers, and factory workers alike refuted the conditions of culture as they had been presented. And for a brief moment, it seemed the world was theirs.

Phillips 2 Although ultimately short-lived, the general strikes of May and June 1968 can be summarized as a widespread reaction against the gathering unpleasantries of late capitalism—including (but not limited to) its decidedly oppressive forms of institutional edifice. In architecture, Modernism became something of a convenient scapegoat—its complicity with capitalism lamented in the critical outcries of Manfredo Tafuri, among others. It was argued that Modernism, despite its lofty promise of utopia had been coopted by a incompatible corporate mainstream, and thus stripped of its moral base, had come to be recast as merely a style—a vast, abstract, white skeleton. Reyner Banham had warned in the early 60’s of the oncoming crisis of design values when he noted that the “foundation stone of the previous intellectual structure of design theory has crumbled”, (Banham 98). Further contributing to a wide-ranging societal disillusionment were the two decades of post-war development--housing projects, serpentine networks of highway sprawl, and other means of intensive modernization to which the general public began to a foster deep seated ambivalence toward. It could be argued that this climate of late capitalism was the formative milieu of junkspace, defined by Koolhaas as the entropic fallout of modernization. Koolhaas’s contemporary investigation of junkspace, reveals its troubling characteristic-- “Its footprint cannot become smaller, only bigger, when it is no longer needed it is abandoned”. There was of course more at play in the social uprisings of the late sixties than a critique of the strip-malling of the landscape, but it certainly was part and parcel of the decidedly oppressive apparatus of social control at the time.

Phillips 3 Nursed in the growth medium of this peculiar period, the Situationists took aim at the doldrums of prescriptive social norms, their goal to “supersede the categorization of art and culture as separate activities and to transform them into part of everyday life”, (Debord). Two key features of the Situationist framework, the notion of Detournement and of the Derive lend themselves well to an assessment of Matta Clark’s polemic. The former is a mode of artistic recombination or recontextualization, while the latter (literally translated as “drifting”) is described as a “technique of rapid passage through varied ambiences”. Both will be applied to an analysis of two of the most significant of Clark’s projects—Splitting (1974), and Conical Intersect (1975). Splitting was the first in a series of building cuts that would come to characterize Clark’s subversive acts of architectural negation—or Anarchitecture as it is often referred. Capturing the attention of the artistic and architectural communities alike, he literally cut a suburban New Jersey house in half with a chainsaw (see appendix 1). Clark remarked at the time that “There is a kind of complexity that comes from taking an otherwise completely normal, conventional, albeit anonymous situation and redefining it, retranslating it into overlapping and multiple readings of past and present”, (Discerens 216). It is this spirit of reconfiguration that exemplifies perfectly the notion of Detournement—the reuse of existing elements (artistic or otherwise) in a new ensemble”. Clark took as raw material the utterly banal, and by a process of subtraction, recast the existing into entirely new spatial experiences and modes of urban inquiry. At its most vulgar, Matta Clark’s violent chainsaw wielding constituted a direct act of subversion—a physical assault on the very materiality of architecture, a direct hacking at its limbs. Yet what distinguishes the art of Matta Clark from the art of an iron

Phillips 4 wrecking ball is the rigorous tactfulness of his slicing. His cuttings were often precluded by intensely detailed sets of schematic drawings, (although records show that he received mostly D’s in structural principles during his time at Cornell and Sorbonne). This suggests that what may appear in his work as an impromptu fit of drunken protest, was in fact guided by a rigorous conceptual intent (see appendix 2). “For his part, Matta Clark was deeply frustrated by the charges that his art was violent and destructive. What some read as decadent or sensationalistic he felt to be necessarily regenerative”, (Lee 114). We might now consider the notion of the Derive (noting that it deals with a psychogeographical “drifting” in space) in relation to a project of one year later. Conical Intersect, considered to be one of his most important, involved the incision through two adjacent 17th century buildings in the historic Les Halles district of Paris—around the socially heated time of its rapid modernization in 1975. The buildings chosen for their proximity to the new construction site for the controversial Pompidou Center, and were scheduled for demolition, leaving Clark with a two week time frame in which to work. He and a few artist friends began to chip away at the decaying buildings with chisels and picks. The result was a tapered radial fissure that opened views from the street through the structural skeleton of the condemned buildings and ultimately to the encroaching Pompidou center just beyond. Expressed here was the tense relationship between positive and negative, public and private, old and new a comment on the obsolescence of space that had been long since forgotten, “rendered inaccessible—through the dictates of real estate and property lines”, (Lee 178). But above all this project signifies a spirit of inquiry that both guided his own process, and that he sought to instill in the public life below. If there was any doubt regarding the social component of this project , one might

Phillips 5 consider its informal “exhibition” in the final days before its destruction--when Matta Clark roasted 750 LBS of beef on the sidewalk of the Pompidou and handed out sandwiches to casual passers-by. More importantly, the phenomenology of channeling pedestrian views from the street should not be ignored. As one casual passerby was quoted: “The first thing you saw was this enormous hole in a building. People noticed it and talked about it on the street”. (178). Conical Intersect thus reflects a profound understanding of the Derive methodology: In a dérive one or more persons during a certain period drop their relations, their work and leisure activities, and all their other usual motives for movement and action, and let themselves be drawn by the attractions of the terrain and the encounters they find there. Chance is a less important factor in this activity than one might think: from a dérive point of view cities have psychogeographical contours, with constant currents, fixed points and vortexes that strongly discourage entry into or exit from certain zones.

Indeed the conscious noticing of these “phychogeographical contours” became the lifeblood of Clark’s art. The physical act of spectatorship became a vital component, “addressing the phenomenon of places in dizzying flux”, (Lee 1). In the face of an increasingly homogenous built environment (that warranted only passive readings and experiences) his fissures served to illicit a sense of wonder about one’s surroundings-through spatial effects that achieved a form of surrealism comparable to the paintings of his father (surrealist painter Roberto Matta).

In holding true to the radical zeitgeist of his age, Matta Clark facilitated a revolutionary re-thinking of the many patterns, problems and potentials of the urban

Phillips 6 experience. His slicing represents the most tangible manifestation of criticality, as he forged into the dominant structure of life a liminal space in which to nurture its own social critique. Although meeting an untimely death at the age of 35, Gordon Matta Clark’s work offers a window into the past and holds a mirror to the present—the physical inaccessibility of his work to a contemporary audience (beyond the films, photos, and other fleeting scraps) of an speaks to us with the urgency of an unfinished oeuvre. It is this condition of incompletion that can serve to fuel a continued spirit of inquiry, criticality, and action in the face of the built environment observed today. Indeed it is this spirit that keeps creative cultures moving forward. As Matta Clark was often quoted--“It’s all about evolution”. 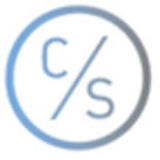