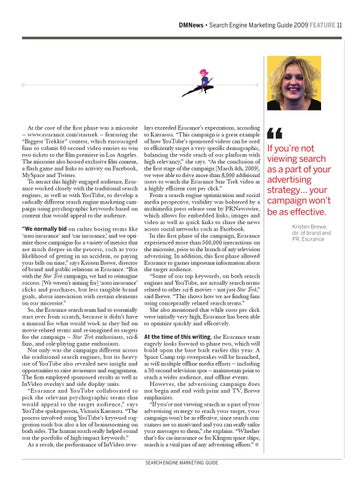 At the core of the first phase was a microsite — www.esurance.com/startrek — featuring the “Biggest Trekkie” contest, which encouraged fans to submit 60-second video entries to win two tickets to the film premiere in Los Angeles. The microsite also housed exclusive film content, a flash game and links to activity on Facebook, MySpace and Twitter. To attract this highly engaged audience, Esurance worked closely with the traditional search engines, as well as with YouTube, to develop a radically different search engine marketing campaign using psychographic keywords based on content that would appeal to the audience. ÈN\ efidXccp Y&#96;[ on rather boring terms like ‘auto insurance’ and ‘car insurance,’ and we optimize those campaigns for a variety of metrics that are much deeper in the process, such as your likelihood of getting in an accident, or paying your bills on time,” says Kristen Brewe, director of brand and public relations at Esurance. “But with the Star Trek campaign, we had to reimagine success. [We weren’t aiming for] ‘auto insurance’ clicks and purchases, but less tangible brand goals, about interaction with certain elements on our microsite.” So, the Esurance search team had to essentially start over from scratch, because it didn’t have a manual for what would work as they bid on movie-related terms and re-imagined its targets for the campaign — Star Trek enthusiasts, sci-fi fans, and role-playing game enthusiasts. Not only was the campaign different across the traditional search engines, but its heavy use of YouTube also revealed new insight and opportunities to raise awareness and engagement. The firm employed sponsored results as well as InVideo overlays and side display units. “Esurance and YouTube collaborated to pick the relevant psychographic terms that would appeal to the target audience,” says YouTube spokesperson, Victoria Katsarou. “The process involved using YouTube’s keyword suggestion tools but also a lot of brainstorming on both sides. The human touch really helped round out the portfolio of high-impact keywords.” As a result, the performance of InVideo over-

lays exceeded Esurance’s expectations, according to Katsarou. “This campaign is a great example of how YouTube’s sponsored videos can be used to efficiently target a very specific demographic, balancing the wide reach of our platform with high relevancy,” she says. “At the conclusion of the first stage of the campaign [March 4th, 2009], we were able to drive more than 8,000 additional users to watch the Esurance Star Trek video at a highly efficient cost per click.” From a search engine optimization and social media perspective, visibility was bolstered by a multimedia press release sent by PRNewswire, which allows for embedded links, images and video as well as quick links to share the news across social networks such as Facebook. In this first phase of the campaign, Esurance experienced more than 500,000 interactions on the microsite, prior to the launch of any television advertising. In addition, this first phase allowed Esurance to garner important information about the target audience. “Some of our top keywords, on both search engines and YouTube, are actually search terms related to other sci-fi movies – not just Star Trek,” said Brewe. “This shows how we are finding fans using conceptually related search terms.” She also mentioned that while costs per click were initially very high, Esurance has been able to optimize quickly and effectively. 8k k_\ k&#96;d\ f] k_&#96;j ni&#96;k&#96;e^, the Esurance team eagerly looks forward to phase two, which will build upon the base built earlier this year. A Space Camp trip sweepstakes will be launched, as will multiple offline media efforts — including a 30-second television spot — mainstream print to reach a wider audience, and offline events. However, the advertising campaign does not begin and end with print and TV, Brewe emphasizes. “If you’re not viewing search as a part of your advertising strategy to reach your target, your campaign won’t be as effective, since search consumers are so motivated and you can really tailor your messages to them,” she explains. “Whether that’s for car insurance or for Klingon space ships, search is a vital part of any advertising efforts.” O J&lt;8I:? &lt;E&gt;@E&lt; D8IB&lt;K@E&gt; &gt;L@;&lt;