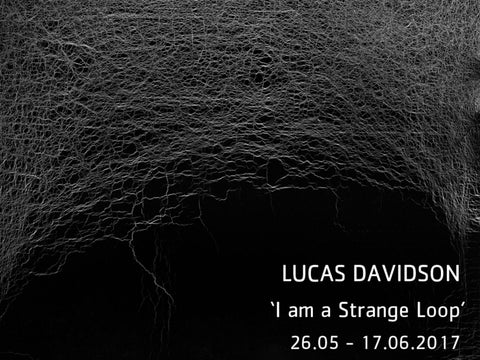 Lucas Davidson’s features rumple, stretch and overlap, his eye occasionally catching ours through the contorting flow. In a strange loop of permanent impermanence, Davidson has disrupted the notion of ‘fixing’ a photographic image. Once it is printed the artist floats the photograph’s skin away from the surface of the paper, allowing it to drift freely in liquid, and filming the self-portrait it in this constant state of flux. This method can be seen in the video work Under Continual Revision, the printed membrane twisting on the screen like a spectre. I am a Strange Loop sees Davidson interrogate the photographic self-portrait through a series of different but related techniques. In the pigment print A Solely Internal Affair fingers have pushed and scraped at the near-illegible photograph’s tissue-like skin, clawing to reach beneath the surface. In the work Death as a Companion to Living from the same suite, black tears in the tissue’s topographic folds appear like creatures migrating across a landscape. In Advance of Not Knowing finds the skin of Davidson himself more visible however it is scratched and smudged with random and violent marks, which appear simultaneously on the image’s surface and on the skin itself.   Davidson is testing the waters of abstraction, using self-portraiture as his launch point. The photographs Unavoidable Matter and Incompleteness Theorem are both formed from black, blank images that were taken of the artist. Davidson’s image, while present in the taking of the image, has not been impressed upon the camera’s lens. In its place, the skin of the original photos have been manipulated to create effects of craquelure, striations and waves which give way to gaping black holes. They are simultaneously cellular and astronomical, a lake beyond a cave and the pupil of an eye.

The exhibition takes its title from Douglas Hofstadter’s exploration of how animate selfhood can emerge from inanimate matter. The mirror is an apt symbol of this ‘strange loop’, an artificial medium reflecting the self we have invented, defined and come to believe as true. The mirror sculptures Association Organ and Anticipation Machine reflect disrupted images of the viewer within forms based on the scale of the artist’s own body. The ascending hexagons of Anticipation Machine recall the spiral shape of DNA – an arguably truer form of self-portrait than our own reflection. Segmenting the viewer’s body into parts it forces us to consider ourselves not as an uninterrupted whole, but as pieces within the broader context of our surroundings: in this case Davidson’s installation. We are now consciously amongst the artist’s self-portraits, whose abstractness, fluidity and voids provide space in which to place ourselves and consider our own sense of perception in place of Davidson’s body. “In the end, we are self-perceiving, self-inventing, locked-in mirages that are little miracles of selfreference,” Hofstadter wrote in 2007. A decade on, in a world where the camera’s lens is turned inward as often as outward; an era of selfie-specific cosmetics; where the way we view ourselves is moderated, filtered, dictated and defined by digital images, Davidson is undertaking an experiment in stripping back all image, colour and form extraneous to the viewing experience in order to activate a deeper consideration of self-perception. “I don’t know how to create something that’s not me,” the artist says. “The work is a truer self-portrait than the way I speak, or dress.” However in creating these essential self-portraits, Davidson allows the works to hold far-reaching subject-hood, questioning photography, perception and identity. 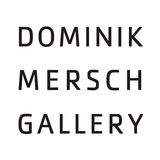