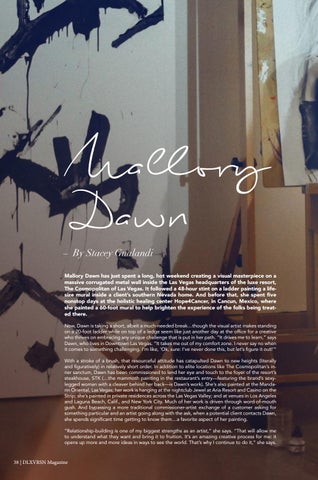 Mallory Dawn has just spent a long, hot weekend creating a visual masterpiece on a massive corrugated metal wall inside the Las Vegas headquarters of the luxe resort, The Cosmopolitan of Las Vegas. It followed a 48-hour stint on a ladder painting a lifesize mural inside a client’s southern Nevada home. And before that, she spent five nonstop days at the holistic healing center Hope4Cancer, in Cancun, Mexico, where she painted a 60-foot mural to help brighten the experience of the folks being treated there. Now, Dawn is taking a short, albeit a much-needed break…though the visual artist makes standing on a 20-foot ladder while on top of a ledge seem like just another day at the office for a creative who thrives on embracing any unique challenge that is put in her path. “It drives me to learn,” says Dawn, who lives in Downtown Las Vegas. “It takes me out of my comfort zone. I never say no when it comes to something challenging. I’m like, ‘Ok, sure: I’ve never done this, but let’s figure it out!’” With a stroke of a brush, that resourceful attitude has catapulted Dawn to new heights (literally and figuratively) in relatively short order. In addition to elite locations like The Cosmopolitan’s inner sanctum, Dawn has been commissioned to lend her eye and touch to the foyer of the resort’s steakhouse, STK (…the mammoth painting in the restaurant’s entry—featuring the brand’s sexylegged woman with a cleaver behind her back—is Dawn’s work). She’s also painted at the Mandarin Oriental, Las Vegas; her work is hanging at the nightclub Jewel at Aria Resort and Casino on the Strip; she’s painted in private residences across the Las Vegas Valley; and at venues in Los Angeles and Laguna Beach, Calif., and New York City. Much of her work is driven through word-of-mouth gush. And bypassing a more traditional commissioner-artist exchange of a customer asking for something particular and an artist going along with the ask, when a potential client contacts Dawn, she spends significant time getting to know them…a favorite aspect of her painting. “Relationship-building is one of my biggest strengths as an artist,” she says. “That will allow me to understand what they want and bring it to fruition. It’s an amazing creative process for me: it opens up more and more ideas in ways to see the world. That’s why I continue to do it,” she says. 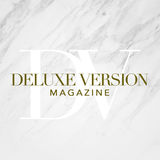