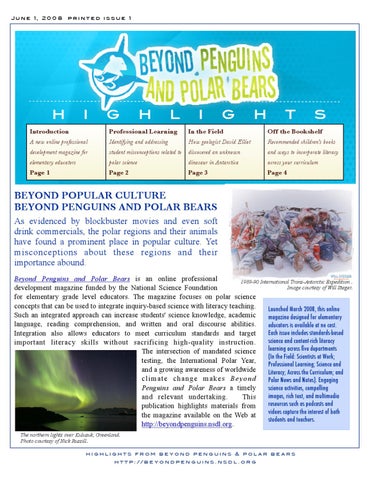 and ways to incorporate literacy

BEYOND POPULAR CULTURE BEYOND PENGUINS AND POLAR BEARS As evidenced by blockbuster movies and even soft drink commercials, the polar regions and their animals have found a prominent place in popular culture. Yet misconceptions about these regions and their importance abound. Beyond Penguins and Polar Bears is an online professional 1989-90 International Trans-Antarctic Expedition . Image courtesy of Will Steger. development magazine funded by the National Science Foundation for elementary grade level educators. The magazine focuses on polar science concepts that can be used to integrate inquiry-based science with literacy teaching. Launched March 2008, this online Such an integrated approach can increase students&#39; science knowledge, academic magazine designed for elementary language, reading comprehension, and written and oral discourse abilities. educators is available at no cost. Each issue includes standards-based Integration also allows educators to meet curriculum standards and target science and content-rich literacy important literacy skills without sacrificing high-quality instruction. learning across five departments The intersection of mandated science (In the Field: Scientists at Work; testing, the International Polar Year, Professional Learning; Science and and a growing awareness of worldwide Literacy; Across the Curriculum; and climate change makes Beyond Polar News and Notes). Engaging Penguins and Polar Bears a timely science activities, compelling images, rich text, and multimedia and relevant undertaking. This resources such as podcasts and publication highlights materials from videos capture the interest of both the magazine available on the Web at students and teachers. http://beyondpenguins.nsdl.org. The northern lights over Kulusuk, Greenland. Photo courtesy of Nick Russill. highlights from beyond penguins &amp; polar bears http://beyondpenguins.nsdl.org

Misconceptions about scientific concepts have been documented in all fields of science, including polar science. The frequent use of polar images in advertisements and entertainment means that students come to school with previously developed notions of penguins, polar bears, the Arctic, and Antarctica. Best practice in science teaching means uncovering misconceptions, probing for student ideas, and using this information to design lessons. Probing for Student Understanding Formative assessment can help you uncover your students&#39; misconceptions about the polar regions. Three books from the National Science Teachers Association, Uncovering Student Ideas in Science, Volumes 1, 2, and 3, explain the use of formative assessment in the classroom. Each volume contains 25 ready-made probes for teacher use across many grade levels. In Beyond Penguins and Polar Bears (April 2008, Issue 2), we followed the format used in these books and created our own probe to assess your students&#39; ideas about fossils. Go online to download the probe, teacher notes, and background information related to fossils. For example, one activity involves a fossil sort to assess if students understand what is and what is not a fossil. There is a paper version of this activity as well as an interactive version you can use online. This activity can help to dispel ideas that all dead organic material becomes fossilized and that fossils are only derived from extinct animals. Geologic Time It is a common misconception that Antarctica has always been a cold and snowy environment. Here is a sequence of activities to introduce Earth’s history and the concept of change over time to elementary students: 1. Brush up on your knowledge of geologic time by going to the Windows to the Universe site at http:// www.windows.ucar.edu and look for the section on geologic time. 2. Have students use an interactive on the National Geographic website to create their own autobiographical timeline (Xpeditions: http:// interactives.mped.org/view_interactive.aspx? id=690&amp;title=). Compare personal timelines with geologic ones on the Windows website. 3. Study rocks and their formation using the Windows to the Universe site again, pointing out that rocks can give us clues about changes occurring in the Earth’s history.

Would you like to find more ideas, read up on current news, or share your thoughts for further discussion? Subscribe to the Beyond Penguins and Polar Bears blog: http://expertvoices.nsdl.org/polar

David Elliot is a geologist at Ohio State University with the distinction of discovering an unknown dinosaur species in Antarctica that was eventually named after him. Currently, David is an Emeritus Professor at the University. This research story takes place in the Transantarctic Mountains, which stretch across the continent of Antarctica. These mountains separate the ice sheet in Antarctica into two distinct regions. The East Antarctic Ice Sheet (EAIS) is a large mass of land-based ice more than a mile thick. The West Antarctic Ice Sheet (WAIS) is covered by thinner ice, some of which is over water. In fact, some of the ice in the WAIS is actually below sea level. Geologically, the land underlying the EAIS is a stable, old part of the continent&#39;s crust called a craton, while the land areas under the WAIS have been described as a &quot;collage&quot; of blocks (of continental crust) and basins. If the WAIS could be seen without its covering of ice, it would look like an area of mountainous islands. News reports of rapid changes in Antarctica usually refer to the WAIS, which is showing more rapid response to climate change than the EAIS (see figure 1). In 1990, geologist David Elliot and his research group were working in the central part of the Transantarctic

Mountains on a series of rocks that were formed during the Jurassic period, approximately 199 million to 145 million years ago. David&#39;s group was measuring the layers, making sketches, taking notes, and collecting and marking samples of the rocks. They were looking for evidence that would help to identify when volcanic eruptions began and how many times they had occurred. The lower assemblage of rocks is a series of sandstones and ash beds, and some &quot;re-worked ash.&quot; David&#39;s trained eye could see the &quot;tricuspate shards&quot; that are evidence of bubbles in the lava. The shape of these shards are evident of violent volcanic activity.

An Unexpected Find One day, David went for a walk after lunch, as he usually did. As he went around a rock outcrop, he noticed some large objects embedded in the rock. &quot;It took awhile for the penny to drop,&quot; he said. He looked more closely and thought, &quot;They must be bones!&quot; One of the bones was shaped like a femur, and others were flat and curved, which he thought meant that they must be ribs. Some looked like giant knuckle bones, and then David saw the jaw and eye socket of the head in the outcrop. (Keep in mind that it is uncommon to find vertebrates in Antarctica, let alone big ones!) David called paleontologist Bill Hammer, who was working far below on the same mountain. Bill is a geology professor at A u g u s t a n a

College in Rock Island, Illinois, where he is well known for his fossil-finding expeditions to Antarctica.

A drawing of Cryolophosaurus ellioti. Image courtesy of David Elliot.

As soon as Bill saw the fragment, he confirmed that it was indeed a bone from a very large reptile. When he saw the rest of the skeleton embedded in the rock, he knew it was a dinosaur. Threefourths of the skull was intact. The snout had been worn away at an angle, so the skeleton was incomplete. But it was an excellent specimen! For the next three years, back in Illinois, Bill&#39;s group cleaned, measured, and reassembled the skeleton. The 22-foot-long, meateating crested dinosaur has since been named Cryolophosaurus ellioti. The genus name, Cryolophosaurus (pronounced: “cry o loff’ o sore us”), which means &quot;cold crest lizard,&quot; or &quot;frozen crested reptile,&quot; and the species name, ellioti, is a tribute to the person who discovered the fossil, David Elliot.

A short list of recommended children&#39;s books with ideas on how to integrate them across your curriculum. Linking science instruction to children&#39;s literature has become increasingly popular in recent years for a variety of reasons: the literature connection motivates students, provokes interest, helps students connect scientific ideas to their personal experiences, accommodates children with different learning styles, and promotes critical thinking. Whatever the reason, we know that books about science can capture the interest of even the most reluctant readers and writers. Students are naturally drawn to the colorful photographs and layouts of nonfiction science texts. Using science books allow teachers to meet their reading and writing goals while filling a need to teach more science. Teachers can use books as a starting point for meaningful classroom discussions; some teachers even begin class by reading a poem or a picture book aloud, simply for the enjoyment of the literature. Some teachers project the book onto a screen so the class can read the text together. Picture books make wonderful writing prompts and can provoke good journal writing. Interdisciplinary thematic units can be broadened by use of children&#39;s literature. The three books highlighted in this section provide elementary students with an opportunity to identify similarities and differences between the Arctic and Antarctica. Students can use the content from these books to complete graphic organizers such as a Venn diagram or table, as well as build content knowledge of the polar regions.

North Pole South Pole. Nancy Smiler Levinson. 2002. Picture book. Recommended ages: grades K-2. Beginning readers can find a clear and concise discussion of the differences between the poles in this introduction to the geography, climate, and inhabitants of the top and the bottom of our world.

Want more? Be sure to check out each free online issue of Beyond Penguins and Polar Bears for additional book recommendations and ways to integrate literacy and science instruction.

Life on the Ice. Susan E. Goodman. 2006. Picture book. Recommended ages: grades 3-5. The photographs in the book take readers on a tour of the world&#39;s ice landscapes, primarily Antarctica. The pages are filled with large, beautiful photographs; the text is in large black type on a white background; and sidebars are set in blue ink. The book discusses the nature of the extreme climate, the planes that fly there, the scientists who study it, and what it takes to live in this environment.

Survivor&#39;s Science at the Polar Regions. Peter D. Riley. 2005. Nonfiction book. Recommended ages: grades 3-5. This book compares and contrasts the polar regions in terms of weather; clothes you would need to wear; plants and animals; ice, water, and snow; traveling in these regions; and seasons. Each topic includes a handson activity suitable for use in a classroom or as at-home enrichment. The book includes a glossary and an index.

Copyright May 2008. Beyond Penguins and Polar Bears is produced by an interdisciplinary team from Ohio State University (OSU), College of Education and Human Ecology; the Ohio Resource Center (ORC) for Mathematics, Science, and Reading; the Byrd Polar Research Center; COSI (Center for Science and Industry) Columbus; the Upper Arlington Public Library (UAPL); and the National Science Digital Library (NSDL). This material is based upon work supported by the National Science Foundation under Grant No. 0733024. Any opinions, findings, and conclusions or recommendations expressed in this material are those of the author(s) and do not necessarily reflect the views of the National Science Foundation. highlights from beyond penguins &amp; polar bears http://beyondpenguins.nsdl.org

This document provides highlights from the first three issues of the Beyond Penguins and Polar Bears online magazine. Included are articles on polar science misconceptions, research on polar fossils, and children's literature. 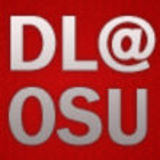