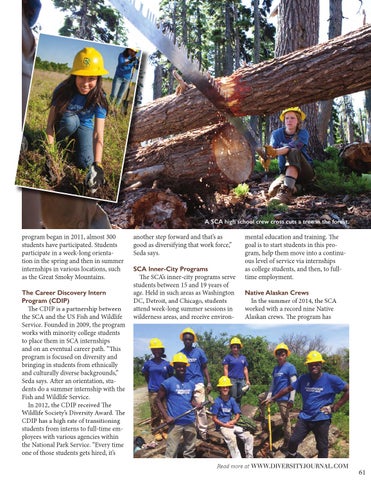 A SCA high school crew cross cuts a tree in the forest.

program began in 2011, almost 300 students have participated. Students participate in a week-long orientation in the spring and then in summer internships in various locations, such as the Great Smoky Mountains. The Career Discovery Intern Program (CDIP) The CDIP is a partnership between the SCA and the US Fish and Wildlife Service. Founded in 2009, the program works with minority college students to place them in SCA internships and on an eventual career path. “This program is focused on diversity and bringing in students from ethnically and culturally diverse backgrounds,” Seda says. After an orientation, students do a summer internship with the Fish and Wildlife Service. In 2012, the CDIP received The Wildlife Society’s Diversity Award. The CDIP has a high rate of transitioning students from interns to full-time employees with various agencies within the National Park Service. “Every time one of those students gets hired, it’s

another step forward and that’s as good as diversifying that work force,” Seda says. SCA Inner-City Programs The SCA’s inner-city programs serve students between 15 and 19 years of age. Held in such areas as Washington DC, Detroit, and Chicago, students attend week-long summer sessions in wilderness areas, and receive environ-

mental education and training. The goal is to start students in this program, help them move into a continuous level of service via internships as college students, and then, to fulltime employment. Native Alaskan Crews In the summer of 2014, the SCA worked with a record nine Native Alaskan crews. The program has