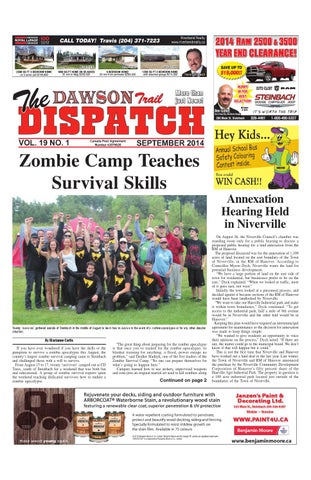 Twenty ‘survivors’ gathered outside of Steinbach in the middle of August to learn how to survive in the event of a zombie apocalypse or for any other disaster situation.

By Marianne Curtis If you have ever wondered if you have the skills or the gumption to survive a zombie apocalypse this August, the country’s largest zombie survival camping came to Steinbach and challenged those with a will to survive. From August 15 to 17, twenty ‘survivors’ camped out at CD Trees, south of Steinbach for a weekend that was both fun and educational. A group of zombie survival experts spent the weekend teaching dedicated survivors how to endure a zombie apocalypse.

“The great thing about preparing for the zombie apocalypse is that once you’ve trained for the zombie apocalypse, its blanket training for anything, a flood, power outage no problem,” said Deidter Stadnyk, one of the five leaders of the Zombie Survival Camp. “No one can prepare themselves for what’s going to happen here.” Campers learned how to use archery, improvised weapons and zom-jitsu an original martial art used to kill zombies along

On August 26, the Niverville Council’s chamber was standing room only for a public hearing to discuss a proposed public hearing for a land annexation from the RM of Hanover. The proposal discussed was for the annexation of 1,100 acres of land located on the east boundary of the Town of Niverville, in the RM of Hanover. According to Councillor Myron Dyck, Niverville wants the land for potential business development. “We have a large portion of land on the east side of town for residential, but businesses prefer to be on the east,” Dyck explained. “When we looked at traffic, most of it goes east, not west.” Initially the town looked at a piecemeal process, and decided against it because sections of the RM of Hanover would have been landlocked by Niverville. “We want to take our Hanville Industrial park and make it within town boundaries,” Dyck continued. “To get access to the industrial park, half a mile of 6th avenue would be in Niverville and the other half would be in Hanover.” Keeping this plan would have required an intermunicipal agreement for maintenance so the decision for annexation was made to keep things simple. “We wanted to give residents an opportunity to voice their opinions on the process,” Dyck noted. “If there are any, the matter could go to the municipal board. We don’t know if that will happen but it could.” This is not the first time that Niverville and Hanover have worked out a land deal in the last year. Last winter, the Town of Niverville and RM of Hanover announced the purchase by the Niverville Community Development Corporation of Hanover’s fifty percent share of the Hanville Agri Industrial Park. The property in question is a 180 acre industrial park located just outside of the boundaries of the Town of Niverville.