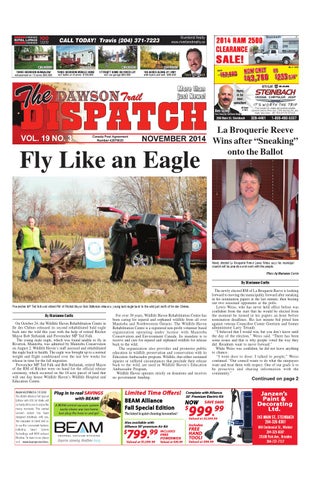 La Broquerie Reeve Wins after “Sneaking” onto the Ballot

Newly elected La Broquerie Reeve Lewis Weiss says his municipal council will be proactive and work with the people. Photo by Marianne Curtis

By Marianne Curtis On October 24, the Wildlife Haven Rehabilitation Centre in Ile des Chênes released its second rehabilitated bald eagle back into the wild this year with the help of retired Ritchot Mayor Bob Stefaniuk and Provencher MP Ted Falk. The young male eagle, which was found unable to fly in Riverton, Manitoba, was admitted by Manitoba Conservation on August 2. Wildlife Haven’s staff assessed and rehabilitated the eagle back to health. The eagle was brought up to a normal weight and flight conditioned over the last few weeks for release in time for the fall migration. Provencher MP Ted Falk and Bob Stefaniuk, retired Mayor of the RM of Ritchot were on hand for the official release ceremony, which occurred on the 18-acre parcel of land that will one day house Wildlife Haven’s Wildlife Hospital and Education Centre.

For over 30 years, Wildlife Haven Rehabilitation Centre has been caring for injured and orphaned wildlife from all over Manitoba and Northwestern Ontario. The Wildlife Haven Rehabilitation Centre is a registered non-profit volunteer based organization operating under license with Manitoba Conservation and Environment Canada. Its mandate is to receive and care for injured and orphaned wildlife for release back to the wild. The organization also provides and promotes public education in wildlife preservation and conservation with its Education Ambassador program. Wildlife, that either sustained injuries or suffered circumstances that preclude their release back to the wild, are used in Wildlife Haven’s Education Ambassador Program. Wildlife Haven operates strictly on donations and receives no government funding.

The newly elected RM of La Broquerie Reeve is looking forward to moving the municipality forward after sneaking in his nomination papers at the last minute, then beating out two seasoned opponents at the polls. Lewis Weiss, who has never held office before was confident from the start that he would be elected from the moment he turned in his papers an hour before nomination deadlines. His last minute bid pitted him against veteran Councillor Cornie Goertzen and former administrator Larry Tetrault. “I believed that I would win, but you don’t know until the day of the election,” Weiss said. “There has been some issues and that is why people voted the way they did. Residents want to move forward.” While Weiss was confident, he did not leave anything to chance. “I went door to door; I talked to people,” Weiss continued. “Our council wants to do what the ratepayers want and treat them with respect. One of our goals is to be proactive and sharing information with the community.”