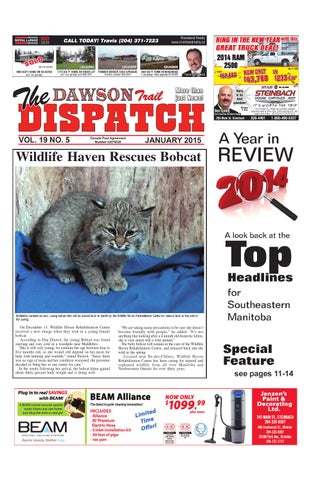 Middlebro resident saved a young bobcat that will be nursed back to health by the Wildlife Haven Rehabilitation Centre for release back to the wild in the spring.

On December 13, Wildlife Haven Rehabilitation Centre received a new charge when they took in a young female bobcat. According to Dan Diawol, the young Bobcat was found starving and very cold in a woodpile near Middlebro. “She is still very young, we estimate her age between four to five months old, so she would still depend on her mom for help with hunting and warmth,” stated Diawol. “Since there was no sign of mom and her condition worsened, the presenter decided to bring her to our centre for care.” In the weeks following her arrival, the bobcat kitten gained about thirty percent body weight and is doing well.

“We are taking many precautions to be sure she doesn’t become friendly with people,” he added. “It’s not anything like looking after a 4 month old domestic kitten, she is very much still a wild animal.” The baby bobcat will remain in the care of the Wildlife Haven Rehabilitation Centre, and released back into the wild in the spring. Located near Ile-des-Chênes, Wildlife Haven Rehabilitation Centre has been caring for injured and orphaned wildlife from all over Manitoba and Northwestern Ontario for over thirty years.