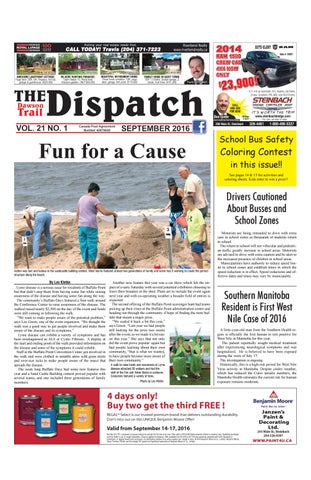 Celebrating 20 Years of Service to Our Communities!

Fun for a Cause

Coloring Contest in this issue!! See pages 14 &amp; 15 for activities and coloring sheets. Kids enter to win a prize!!

Action was fast and furious in the sandcastle building contest. Most teams featured at least two generations of family and some had 3 working to create the perfect structure along the beach.

By Les Kletke Lyme disease is a serious issue for residents of Buffalo Point but that didn’t stop them from having some fun while raising awareness of the disease and having some fun along the way. The community’s Buffalo Days featured a 5km walk around the Conference Center to raise awareness of the disease. The walked raised nearly $2,500 on the day of the event and funds were still coming in following the walk. “We want to make people aware of the potential problem,” says Lee Green, one of the event organizers. “We thought the walk was a good way to get people involved and make them aware of the disease and its symptoms.” Lyme disease can exhibit a variety of symptoms and has been misdiagnosed as ALS or Cystic Fibrosis. A display at the start and ending point of the walk provided information on the disease and some of the symptoms it could exhibit. Staff at the Buffalo Point Convention Center got involved in the walk and were clothed in suitable attire with grass skirts and over-size ticks to make people aware of the insect that spreads the disease. The week long Buffalo Days had some new features this year and a Sand Castle Building contest proved popular with several teams, and one included three generations of family members.

Another new feature this year was a car show which felt the impact of a rainy Saturday with several potential exhibitors choosing to leave their beauties in the shed. Plans are to include the event again next year and with co-operating weather a broader field of entries is expected. The second offering of the Buffalo Point scavenger hunt had teams picking up their clues at the Buffalo Point administration centre and heading out through the community if hope of finding the mini buffalo that meant a major prize. “We scaled it back a bit this year,” says Green. “Last year we had people still looking for the prize two weeks after the event, so we made it a bit easier this year.” She says that not only did the event prove popular again but had people learning about their own community, “that is what we wanted, to have people become more aware of their own community.” A walk to raise funds and awareness of Lyme disease attracted 30 walkers and had the staff of the Fire and Water Bistro in costume. Costumes featured a variety of ticks. Photo by Les Kletke

Motorists are being reminded to drive with extra care in school zones as thousands of students return to school. The return to school will see vehicular and pedestrian traffic greatly increase in school areas. Motorists are advised to drive with extra caution and be alert to the increased presence of children in school areas. Municipalities have authority to reduce speed limits in school zones and establish times in which the speed reduction is in effect. Speed reductions and effective dates and times may vary by municipality.

Southern Manitoba Resident is First West Nile Case of 2016 A forty-year-old man from the Southern Health region is officially the first human to test positive for West Nile in Manitoba for this year. The patient reportedly sought medical treatment after experiencing neurological symptoms and was hospitalized. He is believed to have been exposed during the week of July 17. The investigation is ongoing. Historically, this is a high-risk period for West Nile Virus activity in Manitoba. Despite cooler weather, which has reduced the Culex tarsalis numbers, the Manitoba Health estimates the current risk for human exposure remains moderate.