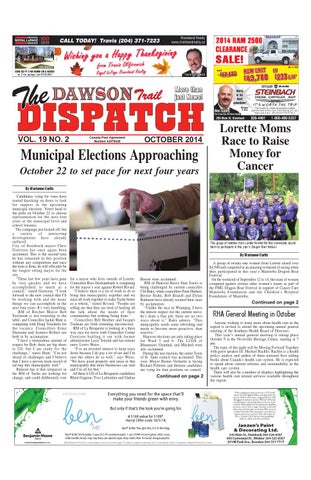 By Marianne Curtis Candidates vying for votes have started knocking on doors to look for support in the upcoming municipal elections. Voters head to the polls on October 22 to choose representation for the next four years at the municipal level and school trustees. The campaign just kicked off, but a variety of interesting developments have already surfaced. City of Steinbach mayor Chris Goertzen has once again been acclaimed. This is the second time he has remained in this position without any competition and once the term is done, he will officially be the longest sitting mayor for the city. “These last few years have gone by very quickly and we have accomplished so much as a council,” stated Goertzen. “I look forward to the new council that I’ll be working with and the many things we can accomplish in the next four years. It’s very humbling. RM of Ritchot Mayor Bob Stefaniuk is not returning to the table, and Councillor Jackie Hunt is competing with Doug Touchette for the vacancy. Councillors Ernie Dumaine and Jeannot Robert are both in by acclamation. “I have a tremendous amount of respect for Bob; these are big shoes to fill, but I am ready for the challenge,” states Hunt. “I’m not afraid of challenges and I believe that I have a proven track record of serving this municipality well.” Rumour has it that ratepayers in the RM of Tache are looking for change, and could deliberately vote

This group of mothers from Lorette formed the first community based team to participate in this year’s Dragon Boat festival.

for a mayor who lives outside of Lorette. Councillor Ross Dechambault is competing for the mayor’s seat against Robert Rivard. “I believe there is a lot of work to do to bring this municipality together and we must all work together to make Tache better as a whole,” stated Rivard. “People are telling me that they are tired of hearing all the talk about the needs of their communities but nothing being done.” Councillors Bill Heather and Jacques Trudeau are both returning uncontested. RM of La Broquerie is looking at a three way race for reeve with Councillor Cornie Goertzen battling it out with former administrator Larry Tetrault and last minute entry Lewis Weiss. “I’ve an invested interest to keep taxes down because I do pay a lot of tax and I’m sure the others do as well,” says Weiss. “We have good property and areas in this municipality that more businesses can start and I’m all for that.” All three LUD of La Broquerie candidates Rhéal Gagnon, Yves Lafrenière and Gäétan

Bisson were acclaimed. RM of Hanover Reeve Stan Toews is being challenged by current councillor Clif Bakx, while councillors Peter Hiebert, Bernie Stahn, Bob Brandt and Dylan Barkman have already secured their seats by acclamation. “Unlike the race in Winnipeg, I have the utmost respect for the current reeve; he’s done a fine job, there are no two ways about it,” Bakx admits. “This municipality needs some refreshing and needs to become more proactive, than reactive.” Hanover elections are only taking place for Ward 5 and 6. The LUDS of Blumenort, Grunthal, and Mitchell were also acclaimed. During the last election, the entire Town of St. Anne council was acclaimed. This year, Mayor Bernie Vermette is facing Richard Pelletier and thirteen candidates are vying for four positions on council.

A group of twenty-one women from Lorette raised over $4,500 and competed in an amazing weekend of racing when they participated in this year’s Manitoba Dragon Boat Festival. On the weekend of September 12 to 14, the team of women competed against sixteen other women’s teams as part of the FMG Dragon Boat Festival in support of Cancer Care Manitoba Foundation and the Children’s Hospital Foundation of Manitoba.

RHA General Meeting in October Anyone wishing to learn more about health care in the region is invited to attend the upcoming annual general meeting of the Southern Health Board of Directors. This year’s annual general meeting is taking place October 9 at the Niverville Heritage Centre, starting at 7 pm. The topic of the night will be Moving Forward Together with guest speaker Dr. Michael Rachlis. Rachlis is a health policy analyst and author of three national best selling books about Canada’s health care system. He is expected to speak about current reforms and sustainability in the health care system. There will also be a number of displays highlighting the various health care related services available throughout the region.