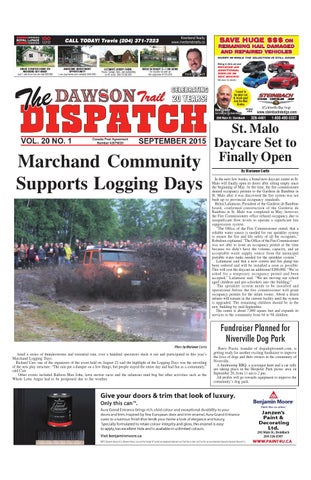 St. Malo Daycare Set to Finally Open By Marianne Curtis In the next few weeks, a brand new daycare centre in St. Malo will finally open its doors after sitting empty since the beginning of May. At the time, the fire commissioner denied occupancy permits to the Garderie de Bambins in St. Malo after it was discovered the fire system was not built up to provincial occupancy standards. Helen Lafantasie, President of the Garderie de Bambins board, confirmed construction of the Garderie de Bambins in St. Malo was completed in May; however, the Fire Commissioners office refused occupancy due to insignificant flow levels to operate a significant fire suppression system. “The Office of the Fire Commissioner stated, that a reliable water source is needed for our sprinkler system to ensure the fire and life safety of all the occupants,” Robidoux explained. “The Office of the Fire Commissioner was not able to issue an occupancy permit at the time because we didn’t have the volume, capacity, and an acceptable water supply source from the municipal portable water tanks needed for the sprinkler system.” Lafantasie said that a new cistern and fire pump has been ordered and will be installed a soon as possible. This will cost the daycare an additional $200,000. “We’ve asked for a temporary occupancy permit and been accepted,” Lafantasie said. “We are moving our school aged children and pre-schoolers into the building.” The sprinkler system needs to be installed and operational before the fire commissioner will grant occupancy permits for the infant rooms. About a dozen infants will remain in the current facility until the system is upgraded. The remaining children should be in the new building by mid-September. The centre is about 7,000 square feet and expands its services to the community from 64 to 94 children.

Amid a series of thunderstorms and torrential rain, over a hundred spectators stuck it out and participated in this year’s Marchand Logging Days. Richard Carr, one of the organizers of the event held on August 22 said the highlight of the Logging Days was the unveiling of the new play structure. “The rain put a damper on a few things, but people stayed the entire day and had fun as a community,” said Carr. Other events included Balloon Man John, lawn mower races and the infamous mud bog but other activities such as the Whole Lotta Angus had to be postponed due to the weather.

Barry Piasta, founder of dogadoptionmb.com, is getting ready for another exciting fundraiser to improve the lives of dogs and their owners in the community of Niverville. A fundraising BBQ, a scavenger hunt and a car rally are taking place in the Hespeler Park picnic area on September 20, from 11 am to 2 pm. All profits will go towards equipment to improve the community’s dog park.