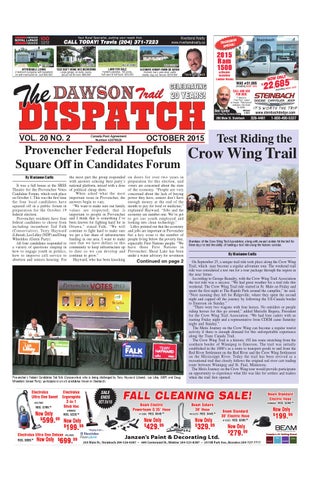 Test Riding the Provencher Federal Hopefuls Square Off in Candidates Forum By Marianne Curtis It was a full house at the SRSS Theatre for the Provencher Votes Candidate Forum, which took place on October 1. This was the first time the four local candidates have squared off in a public forum in preparation for the October 19 federal election. Provencher residents have four federal candidates to choose from including incumbent Ted Falk (Conservative), Terry Hayward (Liberal), Les Lilley (NDP) and Doug Wheeldon (Green Party). All four candidates responded to a variety of questions ranging in how to engage youth in politics, how to improve cell service to abortion and seniors housing. For

the most part the group responded with answers echoing their party’s national platform, mixed with a dose of political cheap shots. When asked what the most important issue in Provencher, the answers begin to vary. “We want to make sure our family values are respected; that is important to people in Provencher and I think that is something I’ve been known for fighting hard for in Ottawa,” stated Falk. “We will continue to fight hard to make sure we get a fair share of infrastructure funding in our area. I want to make sure that we have dollars in this community to keep infrastructure up to date so we can develop and continue to grow.” Hayward, who has been knocking

on doors for over two years in preparation for this election, said voters are concerned about the state of the economy. “People are very concerned about the lack of buying power they have, seniors don’t have enough money at the end of the month to pay for food or medicine,” explained Hayward. “Jobs and the economy are number one. We’ve got to get our youth employed and looking into clean technology.” Lilley pointed out that the economy and jobs are important in Provencher but a key issue is the number of people living below the poverty line, especially First Nations people. “We have three First Nations in Provencher; Shoal Lake has been under a water advisory for seventeen

Provencher’s Federal Candidates Ted Falk (Conservative) who is being challenged by Terry Hayward (Liberal), Les Lilley (NDP) and Doug Wheeldon (Green Party) participate in an all candidates forum in Steinbach.

Members of the Crow Wing Trail Association, along with several cadets hit the trail for three days to test the ability of holding a trail ride along the historic corridor.

By Marianne Curtis On September 25, a unique trail ride took place along the Crow Wing Trail, which may become a regular adventure tour. The weekend trail ride was considered a test run for a tour package through the region in the near future. According to George Beaudry, with the Crow Wing Trail Association the test ride was a success. “We had great weather for a trail ride this weekend. The Crow Wing Trail ride started in St. Malo on Friday and spent the first night at The Rapids Park around the campfire,” he said. “Next morning they left for Ridgeville, where they spent the second night and capped off the journey by following the US-Canada border to Emerson on Sunday.” “There were two wagons with four horses. No outriders or people riding horses for this go around,” added Murielle Bugera, President for the Crow Wing Trail Association. “We had four cadets with us starting Friday night and a representative from CDEM came Saturday night and Sunday.” The Metis Journey on the Crow Wing can become a regular tourist activity if there is enough demand for this unforgettable experience along the Trans Canada Trail. The Crow Wing Trail is a historic 192 km route stretching from the southern border of Winnipeg to Emerson. The trail was initially established in the 1800’s as a route to transport goods to and from the Red River Settlement on the Red River and the Crow Wing Settlement on the Mississippi River. Today the trail has been revived as a recreational trail that closely follows the original red river cart trading route between Winnipeg and St. Paul, Minnesota. The Metis Journey on the Crow Wing tour would provide participants an opportunity to experience what life was like for settlers and traders when the trail first opened.