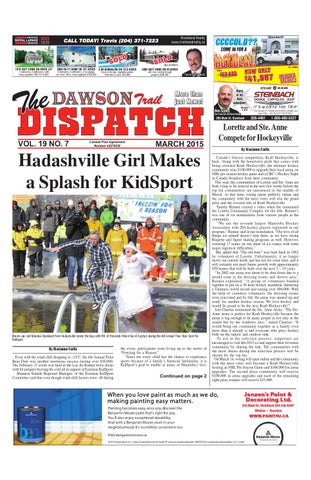 Lorette and Ste. Anne Compete for Hockeyville By Marianne Curtis

By Marianne Curtis Even with the wind-chill dropping to -34°C, the 4th Annual Polar Bear Dare was another enormous success raising over $30,000. The February 21 event was held at the Lac du Bonnet town docks with 64 jumpers braving the cold all in support of Eastman KidSport. Shannon Schade Regional Manager, of the Eastman KidSport Committee said that even though wind-chill factors were -40 during

the event, participants were living up to the motto of “Freezing for a Reason.” “Since not every child has the chance to experience sports because of a family’s financial limitations, it is KidSport’s goal to enable as many of Manitoba’s less-

Canada’s fiercest competition, Kraft Hockeyville, is back. Along with the hometown pride that comes with being crowned Kraft Hockeyville, the ultimate hockey community wins $100,000 to upgrade their local arena, an NHL pre-season hockey game and a CBC’s Hockey Night in Canada broadcast from their community. This year, the communities of Lorette and Ste. Anne are both vying to be noticed in the next few weeks before the top ten communities are announced in the middle of March. At that time, voting opens publicly online and the community with the most votes will win the grand prize and the coveted title of Kraft Hockeyville. Tammy Reimer created a video when she nominated the Lorette Community Complex for the title. Reimer’s was one of six nominations from various people in the community. “We are the seventh largest Manitoba Hockey Association with 204 hockey players registered in our program,” Reimer said in her nomination. “Our love of all things ice related doesn’t stop there, as we have strong Ringette and figure skating programs as well. However, rostering 17 teams on one sheet of ice comes with some major logistical difficulties.” She added that “The old barn” was built back in 1962 by volunteers of Lorette. Unfortunately, it no longer meets our current needs and has not for some time, and it will certainly not meet future growth with approximately 650 homes that will be built over the next 5 – 10 years. “In 2002 our arena was about to be shut down due to a mould issue in the dressing rooms and shower area,” Reimer explained. “A group of volunteers banded together to put on a 36 hour hockey marathon, shattering a Guinness world record and raising over $80,000. With the help of countless volunteers, the dressing rooms were renovated and by fall, the arena was opened up and ready for another hockey season. We love hockey and would be proud to be the next Kraft Hockeyville!” Joel Chartier nominated the Ste. Anne Arena. “The SteAnne arena is perfect for Kraft Hockeyville because the arena is big enough to fit many people in not only in the stands but by the windows also,” stated Chartier. “It would bring our community together as a family even more than it already is and everyone who plays hockey both on the indoor and outdoor rink. To aid in the selection process, supporters are encouraged to visit khv2015.ca and support their favourite community by sharing the link. The communities with the most shares during the selection process will be chosen for the top ten. On March 14, voting will open online and the community with the most votes will become a Kraft Hockeyville hosting an NHL Pre-Season Game and $100,000 for arena upgrades. The second place community will receive $100,000 in arena upgrades and each of the remaining eight prize winners will receive $25,000.