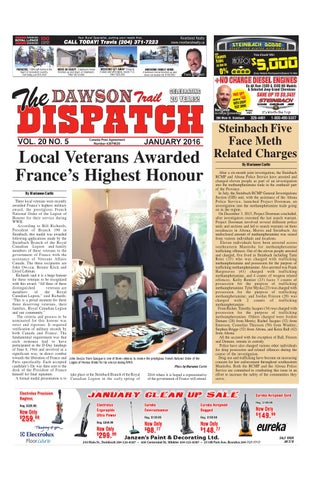 Local Veterans Awarded France’s Highest Honour By Marianne Curtis Three local veterans were recently awarded France’s highest military award, the prestigious French National Order of the Legion of Honour for their service during WWII. According to Bill Richards, President of Branch 190 in Steinbach, this medal was awarded following applications made by the Steinbach Branch of the Royal Canadian Legion and family members of these veterans to the government of France with the assistance of Veterans Affairs Canada. The three recipients are John Owczar, Bennie Klick and Lloyd Lehman. Richards said it is a huge honour for these veterans to be recognized with this award. “All three of these distinguished veterans are members of the Royal Canadian Legion,” said Richards. “This is a proud moment for these three deserving veterans, their families, Royal Canadian Legion and our community.” The criteria and process to be nominated for this honour was strict and rigorous. It required verification of military records by both Canada and France. The fundamental requirement was that each nominee had to have participated in the D-Day landings of June 6, 1944 and involved in a significant way, in direct combat towards the liberation of France and John Owczar from Sprague is one of three veterans to receive the prestigious French National Order of the Paris specifically. Each accepted Legion of Honour Medal for his service during WWII. candidate’s file was then sent to the Photo by Marianne Curtis desk of the President of France himself for final signature. take place at the Steinbach Branch of the Royal 2016 where it is hoped a representative A formal medal presentation is to Canadian Legion in the early spring of of the government of France will attend.