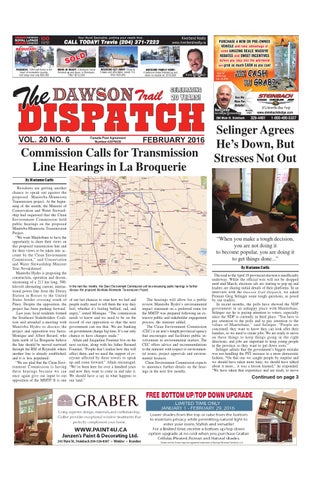 Selinger Agrees He’s Down, But Stresses Not Out

By Marianne Curtis Residents are getting another chance to speak out against the proposed Manitoba-Minnesota Transmission project. At the beginning of the month, the Minister of Conservation and Water Stewardship had requested that the Clean Environment Commission hold public hearings on the proposed Manitoba-Minnesota Transmission Project. “We want Manitobans to have the opportunity to share their views on this proposed transmission line and for their views to be taken into account by the Clean Environment Commission,” said Conservation and Water Stewardship Minister Tom Nevakshonof. Manitoba Hydro is proposing the construction, operation and decommissioning of a 213 km long, 500kilovolt alternating current, international power line from the Dorsey Station in Rosser to the United States border crossing south of Piney. Despite the opposition, the project has been pushing forward. Last year, local residents formed the Southeast Stakeholders Coalition and attended a meeting with Manitoba Hydro to discuss the project and opposition was fierce. Monique and Albert Berard, who farm north of La Broquerie believe the line should be moved eastward through the RM of Reynolds where another line is already established, and it is less populated. “We are glad that the Clean Environment Commission is having these hearings because we can once again give our input to our opposition of the MMTP. It is one

“When you make a tough decision, you are not doing it to become popular, you are doing it to get things done...” By Marianne Curtis

In the next few months, the Clean Environment Commission will be announcing public hearings to further discuss the proposed Manitoba-Minnesota Transmission Project.

of our last chances to state how we feel and people really need to tell them the way they feel, whether it’s feeling bullied, sad, and angry,” stated Monique. “The commission needs to know and we need to be on the record of our opposition so that the next government can see that. We are banking on government change big time. It’s our only chance to have changes made.” Allain and Jacqueline Fournier live on the next section, along with his father Bernard Fournier. “People don’t realize how this will affect them, and we need the support of everyone affected by these towers to speak up and come forward,” Allain encouraged. “We’ve been here for over a hundred years and now they want to come in and take it. We should have a say in what happens to our land.”

The hearings will allow for a public review. Manitoba Hydro’s environmental impact statement on a preferred route for the MMTP was prepared following an extensive public and stakeholder engagement process, the minister added. The Clean Environment Commission (CEC) is an arm’s-length provincial agency that encourages and facilitates public involvement in environmental matters. The CEC offers advice and recommendations to the minister with respect to environmental issues, project approvals and environmental licences. Clean Environment Commission expects to announce further details on the hearings in the next few months.

The road to the April 19 provincial election is unofficially underway. While the official writ will not be dropped until mid-March, elections ads are starting to pop up and leaders are sharing initial details of their platforms. In an interview with the Dawson Trail Dispatch, we asked Premier Greg Selinger some tough questions, as posed by our readers. In recent months, the polls have showed the NDP government in an unhappy place with Manitobans. Selinger say he is paying attention to voters, especially since the NDP is currently in third place. “You have to pay attention to the polls and to pay attention to the values of Manitobans,” said Selinger. “People are concerned; they want to know they can look after their families, so we need to create jobs. We are ready to move on these things to keep things going in the right directions, and jobs are important to keep young people in the province so they want to put down roots.” Selinger admits that the government’s biggest mistake was not handling the PST increase in a more democratic fashion. “On that one we caught people by surprise and we should have taken more time; we should have talked about it more... it was a lesson learned,” he responded. “We have taken that experience and are ready to move