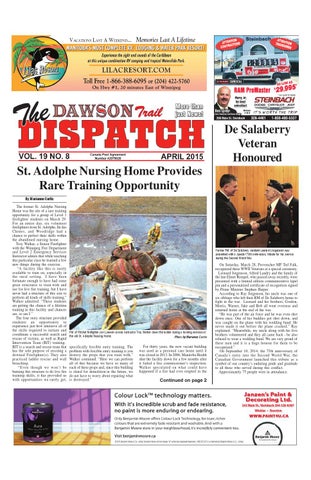 St. Adolphe Nursing Home Provides Rare Training Opportunity By Marianne Curtis The former St. Adolphe Nursing Home was the site of a rare training opportunity for a group of Level 1 firefighter students on March 29. For an entire day, six volunteer firefighters from St. Adolphe, Ile des Chenes, and Woodridge had a chance to perfect their skills within the abandoned nursing home. Troy Walker, a Senior Firefighter with the Winnipeg Fire Department and Level 2 Emergency Services Instructor admits that while teaching this particular class he learned a few new things during the exercise. “A facility like this is rarely available to train on, especially in the rural setting. I have been fortunate enough to have had some great structures to train with and use for live fire training, but I have never had a structure of this size to perform all kinds of skills training,” Walker admitted. “These students are getting the chance of a lifetime training in this facility and chances are, so am I.” The four story structure provided students an opportunity to experience just how intensive all of the skills required to initiate and coordinate a successful search and rescue of victims, as well as Rapid Intervention Team (RIT) training. RIT is a search and rescue team that has the sole purpose of rescuing a downed Firefighter(s). They also practiced ladder rescue and wall breaching. “Even though we won’t be burning this structure to do live fire training skills, it has provided us with opportunities we rarely get,

Former RM of De Salaberry resident Leonard Jorgenson was presented with a special 75th anniversary tribute for his service during the Second World War.

specifically forcible entry training. The problem with forcible entry training is you destroy the props that you train with,” Walker continued. “Here we can perform all of this because we have so many of each of these props and, since this building is slated for demolition in the future, we do not have to worry about repairing what is destroyed.”

For thirty years, the now vacant building was used as a personal care home until it was closed in 2013. In 2006, Manitoba Health shut the facility down for a few months after it failed a fire commissioner’s inspection. Walker speculated on what could have happened if a fire had ever erupted in the

On Saturday, March 28, Provencher MP Ted Falk, recognized three WWII Veterans at a special ceremony. Leonard Jorgenson, Alfred Landry and the family of the late Elmer Rempel, who passed away recently, were presented with a limited edition commemorative lapel pin and a personalized certificate of recognition signed by Prime Minister Stephen Harper. According to Ray Jorgenson, his uncle was one of six siblings who left their RM of De Salaberry home to fight in the war. Leonard and his brothers, Gordon, Morris, Warner, Jake and Bob all went overseas and returned home at the end of the war. “He was part of the air force and he was even shot down once. One of his buddies got shot down, and was caught on the plane with his wedding band. He never made it out before the plane crashed,” Ray explained. “Meanwhile, my uncle along with his five brothers volunteered and they all came back - he also refused to wear a wedding band. We are very proud of these men and it is a huge honour for them to be recognized.” On September 10, 2014, the 75th anniversary of Canada’s entry into the Second World War, the Canadian Government launched this tribute as a symbol of our country’s enduring pride and gratitude to all those who served during this conflict. Approximately 75 people were in attendance.